As we’ve explained many times, this effort comes from the states. More than 30 states have passed criminal justice reforms that focus reducing the rates of repeat offenders, known as recidivism. The states that have led the way on criminal justice reform include Texas, Georgia, South Carolina, and Utah. Many of these states have also passed sentencing reforms for nonviolent drug offenders to focus limited resources on violent offenders.

The prison reform bill — the FIRST STEP Act, H.R. 5682 — is modeled on the state level successes. The bill passed the House by a vote of 360 to 59 and is awaiting action in the Senate. Most agree that in order for the bill to move to floor, some modest sentencing reform provisions will have to be included.

Although conservatives like Sens. Mike Lee (R-Utah) and Rand Paul (R-Ky.) support criminal justice reform, including sentencing reform. Others have refused to acknowledge the successes of the states and are working against a key part of President Trump’s domestic policy agenda.

Sen. Tom Cotton (R-Ark.) is among the small group of vocal opponents. On Thursday, he wrote a piece in the Wall Street Journal in which he railed against prison reform and sentencing reform. He got a lot wrong. Below we go through various parts of his screed to correct the record.

There is no reason to believe that harsher prison sentences would reduce drug use. In an analysis released earlier this year, the Pew Charitable Trusts found no relationship between imprisonment and drug use, arrests, or overdose deaths.

“If imprisonment were an effective deterrent to drug use and crime, then, all other things being equal, the extent to which a state sends drug offenders to prison should be correlated with certain drug-related problems in that state,” Pew researchers explained. “The theory of deterrence would suggest, for instance, that states with higher rates of drug imprisonment would experience lower rates of drug use among their residents.”

The better way to address the issue is to treat the drug problem as an addiction issue. Simply warehousing people in prisons doesn’t address the underlying problem. In fact, it will likely exacerbate the problem by exposing the user to prison, making it harder for him or her to find a job, get an education, or even find housing. A criminal record is often a barrier to a productive life.

"Violent crime has declined since the 1980s because mandatory minimums adopted then locked up violent criminals. But in 2015-16, the most recent years for which full data are available, violent crime increased at its fastest rate in a quarter-century…” 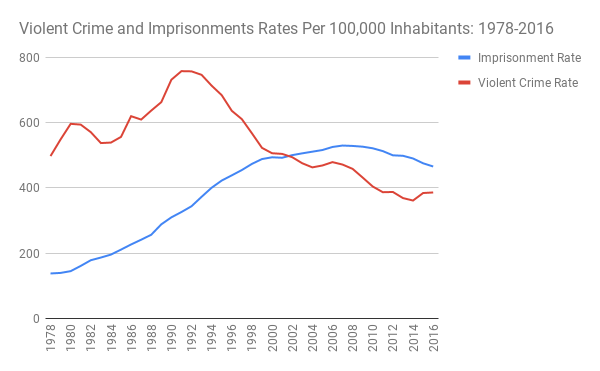 According to the available research, Cotton is either wildly overstating the impact of incarceration on crime rates or he’s completely wrong.

“…preliminary data suggest violent crime might have leveled off in 2017.”

Well, it’s good that Cotton acknowledges that violent crime “might have leveled off in 2017.” Only two years ago, he suggested that “we may be living through the leading edge of a new crime wave.”

Of course, Cotton was doing what politicians do, which is utilizing the politics of fear. Even during the midst of the violent crime decline, there were two years, 2005 and 2006, in which violent crime rates increased before leveling off and declining once again. The lesson is that no conclusions should be drawn from a limited dataset.

For what it’s worth, the violent crime rate is lower now than it was in 1971. 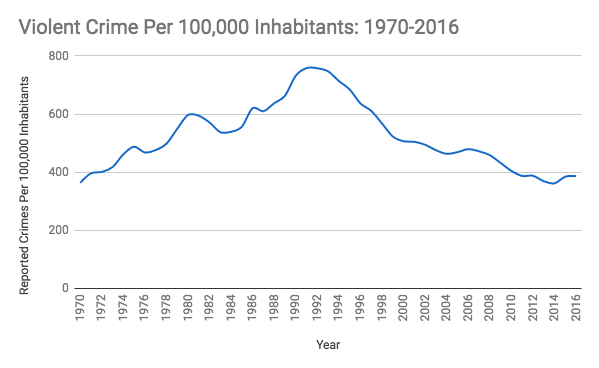 The homicide rate is lower than it was in 1967. 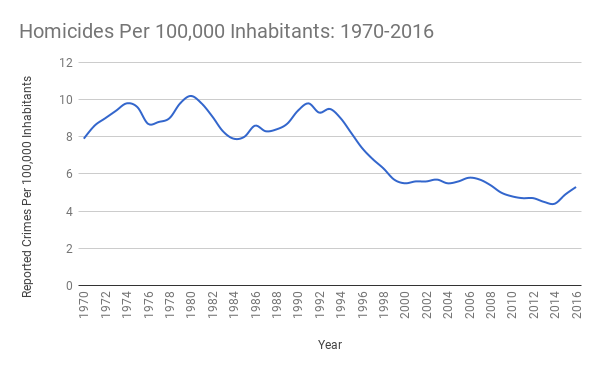 The property crime rate is roughly where it was in 1966. 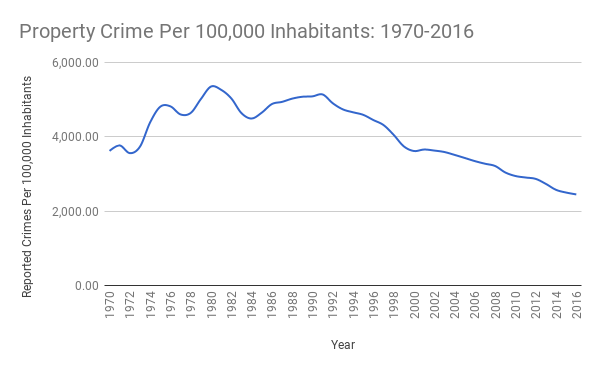 “Congress and the U.S. Sentencing Commission cut prison terms for drug traffickers, gang members and other violent felons in recent years—putting more criminals on the streets. The average federal prison sentence for drug traffickers declined 19% between 2009 and 2016. As a result, the federal inmate population has declined 16% since 2013 and now sits at the lowest level since 2004.”

Cotton believes that this reduction in the federal prison population somehow correlates to the two-year increase in violent crime. As John Pfaff, a professor at Fordham Law School, rhetorically asked, “That 16% decline comes to about 30,000 people. We have about 1.5 million in prison. That’s 2%. Do you really think a 2% decline moves the crime needle?”

No, it doesn’t move the needle because the federal prison population is relatively small when compared to the states. In 2016, the federal prison population represented roughly 13 percent of all people in prison in the country. State prisons are where the vast majority of prisoners are held because, naturally, the vast majority of crimes are prosecuted at the state level.

“Five out of six prisoners end up rearrested within nine years, according to a recent Justice Department study.”

We’ve touched on this study before. The study Cotton is referring to was produced by the Bureau of Justice Statistics (BJS), which is housed under the Department of Justice. The study analyzed recidivism of prisoners released in 2005 from 30 states. Recidivism was defined by rearrest, which isn’t a good measure. A better measure of recidivism is reconviction or reincarceration.

In 2007, Texas became the first state to pass and implement significant reforms to reduce recidivism. Since then, other states have passed similar reforms. Some examples are South Carolina, which passed reforms in 2010, and Georgia, which began a series of reforms in 2012.

“In January 2016 a former drug dealer named Wendell Callahan brutally murdered his ex-girlfriend, Erveena Hammonds, and her two young daughters. But it shouldn’t have happened. Initially sentenced to prison until 2018, he was released in 2014 because of a law that retroactively reduced his sentence.”

Everyone agrees that this is a tragedy that shouldn’t have happened. Callahan had a particularly troublesome past and lengthy criminal history that prosecutors chose to ignore when signing off on his release. The fact is that Callahan shouldn’t have been released.

Derek Cohen of Right on Crime wrote about Callahan and his heinous crime. “This decision was made in regards to risk-agnostic release policies and, since the abolition of federal parole in 1987, the government had no mechanism by which to monitor Callahan to ensure he was complying with release terms,” Cohen explained. “The counter to such policies would not be to eliminate release in all respects, but to ensure that release is responsive to offender risk and that such offenders are able to be monitored.”

“Virtually no one goes to federal prison for ‘low-level, nonviolent’ drug offenses, especially mere drug use or possession. In 2015, there were 247 inmates in federal prison for drug possession. In these rare cases, the inmates usually pleaded down from a more serious offense. In the extreme case of a manifestly unjust sentence, the pardon power is a better instrument of justice than broad sentencing reductions. President Trump has shown himself more than willing to intervene to redress such cases.”

Actually, the report Cotton cites isn’t doesn’t reference 2015 statistics. The report was released by the Bureau of Justice Statistics in October 2015, but the numbers are from the end of FY 2012. The table in which the 247 figure is found literally says in bold letters: “Federally sentenced offenders in the Federal Bureau of Prisons with linked U.S. Sentencing Commission records, by primary offense category, fiscal yearend 2012.”

“Some fiscal conservatives believe that America spends too much on the prison system. Yet the Bureau of Prisons costs taxpayers less than $8 billion a year, or about 0.2% of the entire federal budget.”

The federal government spends too much in general, not only on prisons. Keep in mind that the federal government will, according to projections from the Congressional Budget Office (CBO), run a budget deficit of $804 billion this year, $981 billion next year, and more than $1 trillion in 2020.

Because of the ability of Congress to cut spending, the United States faces serious fiscal problems. Cotton has contributed to these problems. In February, he voted for a budget that busted the spending caps by nearly $300 billion over two years. Because Congress is unlikely to rollback these spending increases, Cotton’s vote for the budget paves the way for even higher budget deficits than the CBO has projected in 2020 and later years.

Direct to the Cotton’s comment about funding for the Bureau of Prisons (BOP). Yes, BOP’s budget was less than $8 billion in FY 2017. That represents about 26 percent of the Department of Justice’s overall budget. BOP’s budget has grown dramatically over the past few decades, in large part due to an overreliance on incarceration. This growth has crowded out funding for law enforcement and other necessary programs.

Congress should be looking for ways to reduce spending. Recidivism reduction programs are one way to do that. The criminal justice reforms in Texas are responsible for $3 billion in savings. Between 2008 and 2016, according to the Pew Charitable Trusts, Texas saw a 16 percent decline in imprisonment and a 29 percent drop in crime. Obviously, modest front-end sentencing reforms would also save money. But the Texas model shows that we can reduce the prison population and increased public safety.

“Congress should improve access to faith-based and other antirecidivism programs in federal prisons. American families deserve safe communities and protection from drugs and crime. Criminals, especially first-time offenders who grew up in rough environments, deserve second chances—once they have done their time.”

A Politico story from May 18 explained that Cotton approached law enforcement groups in an effort to affect the outcome of the vote on FIRST STEP Act in the House. According to the story, “two leading law enforcement groups discuss[ed] a call by Cotton’s office this week for letters of opposition on prison reform ahead of a White House summit…on the issue.”

If Cotton truly cares about recidivism reduction, he has a strange way of showing it.