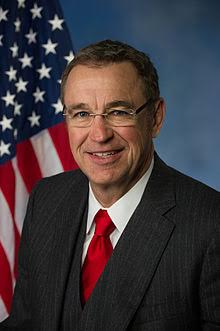 Rep. Salmon served in the House from 1995 to 2002 before he was elected to the House again in 2013. He is a member of the House Committee on Education and the Workforce, and the House Committee on Foreign Affairs. He voted against a bill in September that maintained high levels of federal spending and set up a low-accountability lame duck session of Congress.

One of Rep. Salmon’s most important accomplishments in the House is his role in founding the HFC. He has been a driving force behind the caucus’ efforts to get a positive, conservative legislative agenda through the House. “We’re not the caucus of no. We’re a group trying to get to yes,” he has stated. “We believe we have a very different guiding set of principles on balancing the budget and getting back to regular order. Doing things the right way are extremely important to us.”

To further his goal of fixing the way policy is made in Washington DC, the congressman has introduced legislation to reform Medicaid, end federal funding for Amtrak, and protect whistleblowers from retaliation from labor unions.

In an effort to promote patient rights and roll back the federal government from interfering with patient care, Rep Salmon introduced H.R.3012, the Right to Try Act of 2015. This much-needed legislation would “prevent federal agencies from interfering with or blocking the implementation of RTT [Right to Try] laws that have been passed in 28 states to date.”

Under the legislation, Congress would not get in the way of state laws that help those who are terminally ill get access to experimental drugs that have the potential of helping them battle their illness. FreedomWorks has discussed the importance of this bill previously. Championing this legislation demonstrates how conservative ideas can support both federalism and the needs of our fellow citizens, while showing compassion for those trying to take control of their medical treatment.

For his legislative record, his dedication to fighting for conservative principles, and his role in establishing the HFC, Rep. Salmon is FreedomWorks’ Congressman of the Month for November 2016.