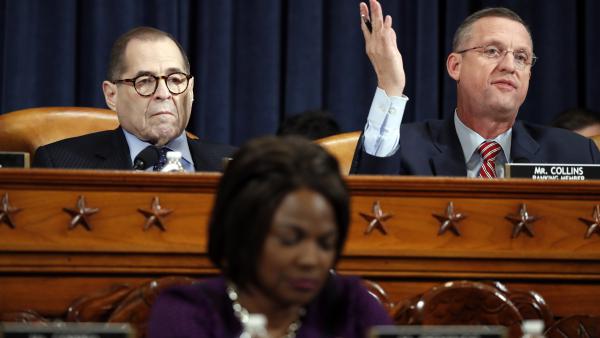 More’s response is an incredible espousement of one of the fundamental principles of the common law: “And when the last law was down, and the Devil turned ‘round on you, where would you hide, Roper, the laws all being flat? This country is planted thick with laws, from coast to coast, Man’s laws, not God’s! And if you cut them down, and you're just the man to do it, do you really think you could stand upright in the winds that would blow then? Yes, I’d give the Devil benefit of law, for my own safety’s sake!”

As Prof. Turley so eloquently explained during the House Judiciary hearing, it seems today that many have sought justice because of rage. Rather than begin with the facts and move systematically towards a just conclusion, many have begun a quest for justice from a place of moral outrage, only seeking facts to bolster their outrage post hoc. Nowhere has this been more evident than in the effort to impeach President Trump.

Political pundits and television personalities have consistently demonized Republican members of the House and Senate for raising procedural issues surrounding the impeachment inquiry. Some have even gone so far as to claim that House Republicans are concerned primarily with process because they lack sufficient grounds to defend the president on substance.

However, most of the individuals making such arguments have missed the point: procedure is just as important as substance.

Since the drafting of the Magna Carta, the common law has enshrined the rights of the individual against the arbitrary whims of the government. The Fifth Amendment to our own Constitution lays out quite clearly that “No person shall be...deprived of life, liberty, or property, without due process of law.” The reason our Founders saw it necessary to include this section in our constitution was because they had witnessed the capricious power of the nobility. The Founders had seen firsthand the importance of ‘planting the laws thick’ because they had seen their compatriots swept up in the winds of royal disfavor.

And so the Founders created a justice system where the presumption of innocence of the accused is not peripheral, but foundational. The burden of proof rests squarely upon the accuser, not the accused. Although some House Democrats would have you think otherwise, this foundational precept is just as important in an impeachment proceeding as a criminal trial.

Wrapped up within the American conception of justice is the implication that process matters as much as facts. After all, it is not uncommon for an accused criminal facing mountains of evidence to be released once it is revealed that their due process rights had been violated. This is certainly not because the accused is presumed to be innocent of any wrongdoing. Rather, it is because procedural rules are just as important as criminal statutes. It is this basic principle of the common law that has upheld the legitimacy of our legal system since its inception. In order for us to see legitimate ends, we must use legitimate means.

Towards this end, the House of Representatives has consistently failed to use legitimate means in their impeachment inquiry of President Trump. And it is because of the lack of legitimacy in their process that House Democrats will not see the conclusion they desire.

It is important to note that House Democrats have mostly abided by the rules in a technical sense. This is because the Constitution is so vague on the subject of impeachment that the House would practically have to go out of their way to violate the basic constitutional guidelines. The issue at hand is not one of technicalities, but of legitimacy.

By denying the minority practically any meaningful method to impact the seemingly foregone conclusion of impeachment, House Democrats have set a disastrous precedent for dealing with future allegations against a sitting president. In effect, House Democrats have trampled the precedent of previous such inquiries for partisan gain. In doing so, they have opened up the entire process to questions of legitimacy that will have far-reaching impacts.

It is not for me to judge whether President Trump is deserving of impeachment. I have a representative and two senators in whom I have vested that immense responsibility.

However, it is important that our representatives recognize the gravity of their actions before making their final decision. The questions of legitimacy and process have yet to be addressed by the President’s accusers: the House majority. Though they may speak of a fair process, their actions speak to the contrary.

It might be too late to alter the course of the impeachment proceedings, since they are rapidly coming to a close. But it is not too late to consider the broader impact that the impending impeachment votes will have for our country. In fact, it is the duty of each member that will sit in judgment of the president to consider the long term impact of their vote. It is our hope that reason, not rage, should rule the day.

In the words of Prof. Turley; “before we cut down the trees so carefully planted by the Framers, I hope you consider what you will do when the wind blows again . . . perhaps for a Democratic president. Where will you stand then ‘the laws all being flat?’”