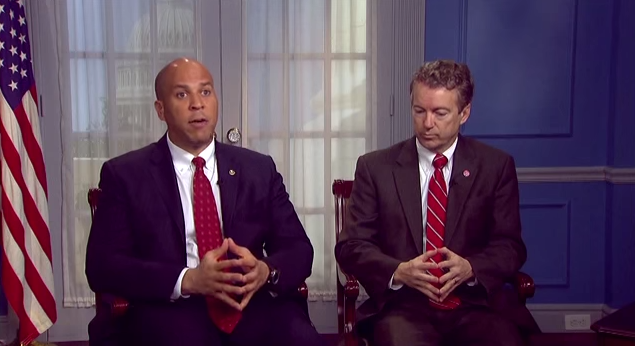 On Tuesday, Sens. Rand Paul (R-KY) and Cory Booker (D-NJ) participated in a forum hosted by Louisville, Kentucky-based Sullivan University where they discussed the Record Expungement Designed to Enhance Employment (REDEEM) Act, landmark sentencing legislation that they introduced last year and plan to roll out in the new Congress.

Paul and Booker acknowledge that they don't agree on many things, but they both believe that the criminal justice system is broken, leaving too many Americans without employment opportunities, and in dire need of meaningful reform.

"[W]e only have 5 percent of the world's population, but we have 25 percent of the human beings that are in prison," Booker said during the forum. "Chillingly, 70 percent of those -- close to 75 percent -- are nonviolent offenders. Now, this should not be the case. Americans do not have any greater proclivity to criminality than any other human being."

"In fact, I think that we, as a nation that believes in freedom and believes in empowering individuals to be successful, should evidence a justice system that should be the envy of the globe. Not one, right now, that has incarceration rates that are so extraordinarily high," he said. "And incarceration rates, when you look at how they affect poor and minorities, in fact, we have a larger incarceration rate between blacks and whites right now, in terms of percentage of population, than apartheid South Africa did in its worst moments."

Booker also noted that the prison population "has gone up 800 percent in the last 30 years alone" and, when they are released, some 60 percent wind up back behind bars. Addressing the racial disparities in the criminal justice system, Booker said that there are "more African-Americans...under criminal supervision than all the slaves in 1850."

Paul, too, focused on racial disparities. "When I think about this, I think back to the speech Martin Luther King gave at Stanford [University] in 1967, when he talked about there being 'two Americas.' And, unfortunately, I think we still have some of that," the Kentucky Republican said. "We got rid of some of the worst part of legal separation, but we still have, in many ways, two Americas, where people are treated differently. And I don't think it's on purpose, but people are inadvertently treated differently -- either they live in poverty or, because of poverty, many minorities are caught up in this."

"When you look at the statistics, three out of four people in prison for nonviolent drug crimes are black or brown. And it isn't because police have said, 'oh, let's go hunt down black and brown people; let's be racially discriminatory, but the racial outcome of the war on drugs has disproportionately incarcerated folks," he added.

Paul explained that REDEEM Act would restore "the opportunity to work," giving nonviolent offenders the chance to become productive, taxpaying citizens rather than being caught up in the criminal justice system, where their indiscretions stick with them, often preventing them from gainful employment, and increase the risk of recidivism.

Because the "tough on crime" attitude still exists, though declining, some may take issue with this approach. Speaking at CPAC in 2013, then-Virginia Attorney General Ken Cuccinelli, a Republican, warned his fellow conservatives not to get “excited to lock up every convict and throw away the key." Instead, he said, "Conservatives should lead the campaign to changing the culture of corrections in America."

The REDEEM Act, as well as other criminal justice reform legislation, aren't only the moral thing to do, they also will relieve some of the burden on taxpayers by reducing recidivism rates. Texas, for example, implemented reforms that saved taxpayers $2 billion in prison construction costs.

With certain areas of the federal budget expected to explode over the next several years, lawmakers will have to look for places where they can save money, and criminal justice reforms, such as Paul and Booker's bill, present them with that chance.

Please do!! This is the reason they had the death penalty. Since we are civilized and won't kill anybody I think its time to look at the waste of potential.