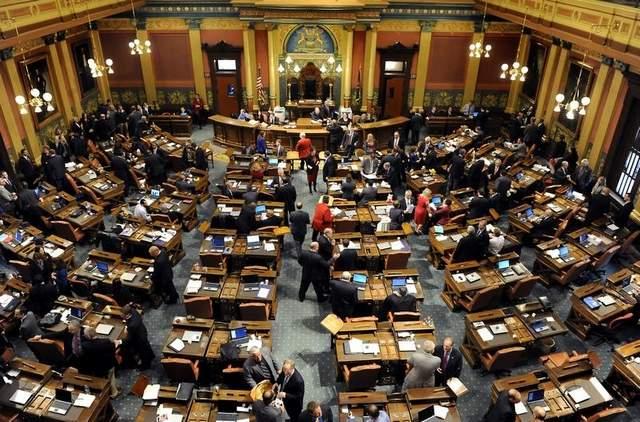 The reforms would protect innocent property owners from government overreach

On Thursday, the Michigan House of Representatives passed a bipartisan package of eight bills that would overhaul the state's civil asset forfeiture laws to offer more protections for innocent property owners. The Wolverine State is just the latest to advance reforms that curtail this pernicious brand of government overreach.

Passage of the reform bills comes a week after the Michigan House Judiciary Committee heard jaw-dropping testimony from Annette Shattuck, a mother of four children, who recounted her family's story of armed raid on her home last year by law enforcement. Shattuck's mother was watching her children while she was out. "After they breached my door, at gunpoint, with masks, they proceeded to take every belonging in my house," she told the committee. "And when I say every belonging, I mean every belonging."

The list of confiscated property provided by the Washington Post includes televisions, a leaf trimmer, a bicycle, a weed whacker, a chainsaw, and a snowblower. "How do you explain to your kids when they come home and everything is gone?" Shattack asked lawmakers.

Shattack was targeted because she is a registered medical marijuana patient, as well as a caregiver. Though strictly regulated, medical marijuana is legal in Michigan. Users and caregivers are allowed to grow a limited number of plants for themselves and patients. Despite medical marijuana’s legal status, law enforcement continues to go after patients and registered practitioners through civil asset forfeiture.

Ginnifer Hency, another registered medical marijuana patient and caregiver, told a similar story. Her home was raided by local law enforcement and her family's property seized. "They have had my stuff for 10 months," Hency said last week. "My ladders, my iPads, my children's iPads, my children's phones, my medicine for my patients." Law enforcement allegedly seized items of a rather personal and intimate nature.

Neither Shattack or Hency were ever convicted of a crime, but Michigan's civil asset forfeiture laws encourage abuse because of the low standard of evidence the government is required to meet, and the perverse profit motive that exists. Law enforcement in the state are allowed to keep 100 percent of the proceeds from forfeitures. This is not a small sum. The Detroit Free Press reports that Michigan law enforcement seized $24.3 million in cash and property in 2013.

Michigan House Republicans, who control the lower chamber, made civil asset forfeiture reform one of their top priorities for the 2015 legislative session. The package includes HB 4505, which raises the evidentiary standard to "clear and convincing evidence," and HB 4508, which offers protections for registered medical marijuana users. Other bills would heighten transparency and improve uniformity in state law.

The eight civil asset forfeiture reform bills passed the Michigan House, according to the Associated Press, with solid bipartisan majorities. Perhaps the most important bill, HB 4505, passed by a vote of 103 to 6, while HB 4508 was approved with a thinner, though still strong, majority, by a vote of 81 to 28.

There is still room for stronger reforms, such as eliminating the profit incentive that often motivates seizures of property without a criminal conviction, but the package passed by the Michigan House on Thursday is certainly a step in the right direction. The bills now head over to the Republican-controlled Senate, where the fate of the reforms in the upper chamber is uncertain.