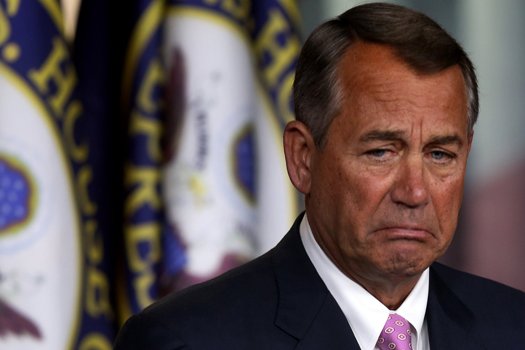 Boehner's leaving. You did that, you made that happen.

House Speaker John Boehner has announced that he will resign from Congress at the end of October. You read that right, he’s not just stepping down as Speaker of the House, he’s leaving Congress altogether, creating a seismic shift in the congressional landscape.

While the suddenness of this move comes as a surprise, it was no secret that Boehner’s political future was already in serious jeopardy. After Rep. Mark Meadows authored a resolution calling for Boehner to step down, airing a lengthy list of grievances with his leadership, it has become increasingly clear that the freedom wing of the Republican Party, spurred on by widespread dissatisfaction at the grassroots level, was ready to oust Boehner over his lack of backbone in the ongoing budget negotiations. A preemptive resignation spares Boehner the embarrassment of being kicked out by his own party, and was probably prudent on his part.

For the last several months, FreedomWorks has been highlighting Meadows’ grievances, as well as other failures of House leadership to adequately represent the caucus. These range from backing big spending bills and more debt without reform, to working in secret without input from fiscal conservatives, to unilaterally killing a liberty-oriented amendment that had the broad support of the Republican Congress.

But most egregious - and what ultimately led to Boehner’s downfall - was his practice of exacting revenge on those Members who dared to disagree with leadership, and vote contrary to his wishes. Mark Meadows was only the most visible casualty of this culture of vengeance, being stripped from his committee assignment for opposing Boehner, until an overwhelming wave of public pressure forced his reinstatement. That was far from the only instance of petty retribution, with Reps. Tim Huelskamp, Daniel Webster, Richard Nugent, David Schweikert, Justin Amash, and Walter Jones suffering a similar fate, albeit without reinstatement.

Across America, the grassroots movement saw this behavior, and deemed it unacceptable. They demanded better representation. They demanded a leader who would listen to the freedom wing, instead of trying to silence it. All told, nearly 200,000 FreedomWorks activists told Congress that they were fed up with John Boehner, and for once, Congress listened.

This announcement serves as an important reminder that the government works for the people, not the other way around. When Congress fails, it is the people who will hold them accountable, and this is why FreedomWorks is devoted to keeping the grassroots educated about what their representatives are doing. Gone are the days of covert, back-room legislating, shielded from the watchful eyes of the American public. There’s nowhere left to hide anymore.

John Boehner’s resignation is a clear victory for the grassroots, and a clear message to Congress: Hold yourselves to a higher standard, or else we will.

Here's what activists did to help bring about a new speaker
Tags John Boehner
Log in or register to post comments.
10 comments

Next bum on the list....Mitch McConnell!!!

What the republicans need is someone not afraid to tell the truth when the democrats to include Obama lie about who is the problem and who has created the problems. The democrats are always placing the blame for their actions that have created our problems on the republicans. The 34 senators that just proved that Obama and his liberal socialist are still able to violate the constitution and endanger us all with evil such as the Iran deal. Harry Reid passed a bill to create the current democrat control after they lost the election.

While everybody is distraction by the clinton episodes, boehner has decided to get out before he gets sucked deeper into the cesspool that he , mcconnel and most of the democrats have created.. beware john boy -- when you turn your back, the bitch will bite...

The present speaker and congress still haven't given the voters of our
fine country their "30 Full Voting Rights".

Lets keep pushing for these rights.

More like AstroTurf seems to have a little bit of influence left after all. The way I look at it is that at least boehner had a degree of common sense in a party that seems to be confused.So what's the plan now? Let me take a guess. Well... Seeing as how it seems that the GOP seems to enjoy contrarian sensibilities I'm going to guess they will elect someone who is... SUPER conservative. Yes- regardless of the fact that the country as a whole is moving away from socially conservative idealism , of course that seems like a splendid idea. I can't hide the fact that I'm actually pleased with that prospect because in doing so the GOP can count on losing further elections.

Sure stoney...the GOP Conservative should take your (the enemy's) advice on how to be a better Democrat. Good God man it looks like if we just all become Dem's the world be a perfect place! Never take advice from your political enemies unless you want to cease to exist. Nice try Stones!

You are in la la land regarding the immigrant vote. I am an immigrant and I am not at all supporting the illegal invasion to my country. It is an insult to legal immigrants to suggest as you do, that we are somehow supporting the criminal invasion.

Side note: you guys need to implement a secondary level "reply" to comments because otherwise it looks like I am replying to myself versus the person whom responds to me.
Moving on, Logan, here's the thing and I'm not sure why I should even care. Basically what I see going on with the current GOP is that there is a cause and effect of the changes in the demographic composition of the country. To put it simply the traditional GOP base, as in socially conservative voters- are gradually losing their influence over the outcome of elections.

The logical thing would of course be to try and reach out to some of the other groups whom are coming into the country. The immigrant vote is now a crucial piece to winning any election and the party whom doesn't garner that vote will very likely lose, as was the case in 2008 and 2012. So what has the GOP done? Well they now have a number of candidates who have come out with some grossly anti-immigrant rhetoric, which while helps them gain eager, enthusiastic support within the base , will lose them the election in 2016 and perhaps by a landslide.

Conservatives and Republicans need to find a better way to channel their frustrations into something constructive. Becoming even more conservative will simply alienate them from the rest of the demographic. If Republicans lose in 2016, which I see as likely then once more we will be stuck with outright gridlock. The GOP needs to have some serious discussion amongst themselves in regards to how they intend to move forward in the future. 2 Strong parties are what the country needs. The GOP has not been actively participating in politics for some time now as they are on the defensive. But if they were to take stands that were more universally appealing to a diverse cross section of the country then in turn we would actually get better representation from our politicians. Its really that simple

I'm glad you think it's a splendid idea. I'm excited too!