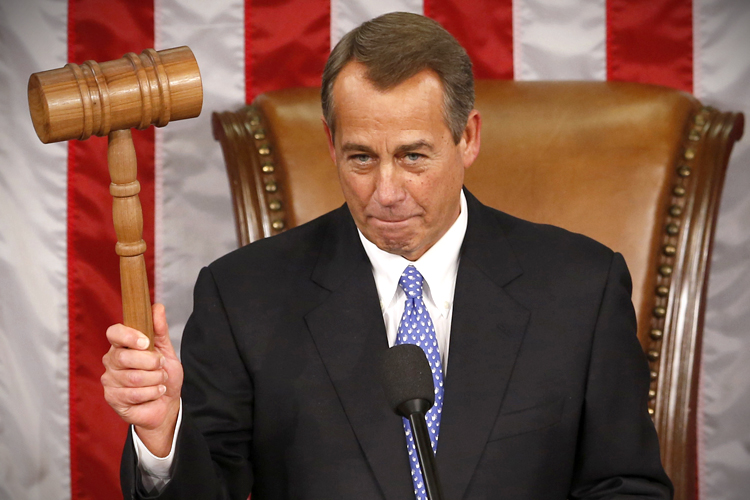 Since 2011, when he assumed the gavel, Boehner has gone out of his way to antagonize principled members of his own caucus. In December 2012, for example, Republican leadership unceremoniously purged three fiscal conservatives from their committee assignments. When it was rumored that he would be removed from the House Budget Committee, Rep. Justin Amash (R-MI) said that he "ha[d] not received a single call, e-mail, or text from Republican leadership confirming" the report.

Boehner attacked many of his own members as well as fiscally conservative organizations, including FreedomWorks, that opposed sequester-busting spending increases in the Ryan-Murray budget deal. Earlier this year, Boehner's leadership, with help from House Minority Leader Nancy Pelosi (D-CA), orchestrated a surprise voice vote to pass the Medicare "doc fix" while most members were absent from the floor.

This measure came with a $21 billion price tag, funded by debt on the backs of taxpayers, and House Republican leaders sheltered themselves from the sunlight of roll call vote, which would have allowed the American people to see how their representatives voted, preferring the darkness of a voice vote.

More recently, Boehner and his leadership team left fiscally conservative members out of negotiations on the 1,600-page government-funding bill, known to many as the "CROmnibus," leaving them hardly any time to read the $1 trillion bill.

Over the last couple days, a handful of fiscally conservative members -- including Reps. Jim Bridenstine (R-OK), Thomas Massie (R-KY), and Ted Yoho (R-FL) -- have announced that they will not support Boehner when votes for Speaker are cast on Tuesday. There may be more who join them.

Not only are fiscally conservative members rejecting Boehner, 60 percent of Republican and Republican-leaning independent voters said that they want someone new as the next Speaker, according to a survey released last week. Only 25 percent supported Boehner.

Boehner has had plenty of time to show that he's capable of leading the House and pursue the limited government ideals on which Republicans ran. Instead, he's proven himself to be a shaky leader with little credibility among fiscal conservatives. Boehner has failed to lead, and he's sold out taxpayers time and time again. House Republicans shouldn't preserve the status quo on Tuesday, they should pull the gavel directly from Boehner's hand and elect a new Speaker.

Send a Message!
Tags John Boehner, Speaker of the House, House of Representatives
Log in or register to post comments.
2 comments

Fore on the crocette pitch,, johnny playing through.

Speaker Boehner:
Remember Dave Bratt.
Cantor is gone.
You're next.