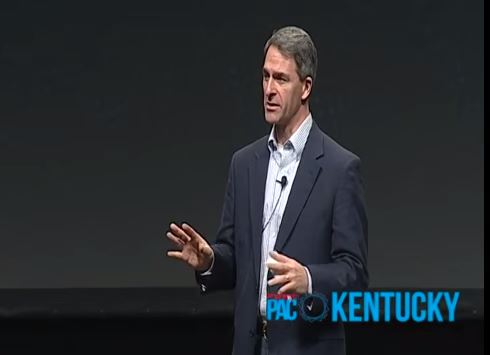 The NSA has a record of every phone call any American makes. "Which is an incredible amount of information," Cuccinelli told the assembled freedom-loving reformers, "with no warrant, with no suspicion that you've done anything wrong. And yet they defend this -- and they've been doing it for 7 1/2 years -- because they say you don't have any right to privacy in that information. You gave it up when you made that phone call, and let the phone company know what you were doing."

"We just filed in the last week or so to certify the class of everyone who makes phone calls in this country, so if things go well, soon I'll be your lawyer."

I caught up with Cuccinelli after he spoke.

"We're well into this NSA lawsuit -- FreedomWorks, my client, along with Senator Rand Paul," said Cuccinelli. "We're suing the federal government for violating virtually every adult's Fourth Amendment rights by collecting all of our phone data -- pretty much everything except the conversation itself. The numbers you dial, how long you're talking with them, the type of phone you have, generally where you're located when you make those phone calls."

"I haven't seen a lot of discussion about the fact that they're sweeping up location data," noted the former Virginia Attorney General. "It's general data, it's not GPS. But so what, if I make a phone call today they know I'm in Kentucky and not in Virginia. And they know I'm in Louisville. And they can kind of look at the newspaper to figure out where I might have been. It doesn't take a lot to put these pieces together, and government shouldn't have that information."

The phone companies own the data generated by your telephone calls, but their use of that data is covered by your contract with them, he said.

"You can pull up the Verizon privacy policy online. It's part of your contract. AT&T, same thing," Cuccinelli said. "We all thought we were contracting to keep our data private. And it doesn't matter if they own it if we have a contractual relationship. Contract rights are protected in the Constitution before property rights. I mean, that didn't come until the Fifth Amendment. The contract clause is in the original Constitution. That should should be good enough. And there are at least four statutes I can think of off the top of my head that supposedly keep our data private, including as against the government."

So just because the telephone provider owns the data, that doesn't mean they can do with it whatever they want. They must follow the contractual obligations with the individual customer.

Even if companies have contractual clauses allowing them to release data to the government, in the presence of government coercion there is no way, apart staying out of the phone market altogether, for customers to avoid having their data collected by the government. Staying out of the market for phone services is essentially impossible in the modern era.