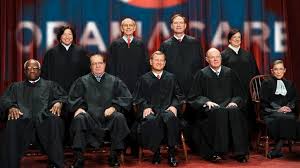 Back in 2012, Justice Roberts infamously interpreted the ACA penalty as a tax. Once again Roberts’ interpretive skills “saved” the day and the self-defeating piece of legislation much to the blatant disregard of the Constitution and the American people.

This time, however, the Court looked at the legality of federal subsidies available on ObamaCare exchanges despite the Act calling for subsidies available through only “state” exchanges. On its face, the availability of subsidies to individuals is limited to purchases through a state-run exchange. And a plain meaning of the word “state” does not include “federal.”

Roberts looked at the plan as a whole and its three essential components: guaranteed issue and community ratings requirements, individual insurance purchasing mandates, and availability of subsidies for individuals at specific income levels. In the majority’s eyes, these three reforms were so closely connected that it was necessary all three had to remain intact to keep Obamacare from completely unraveling.

In coming to his decision, Roberts concluded that it could not have been possible for Congress to intend to limit the flow of subsidies strictly through an exchange set up by the states only. In Roberts’ eyes, “state” and “federal” are essentially one in the same. Justice Scalia pointed out in his dissent that the choice of words was not merely a “drafting fumble” as the phrase “exchange established by the State” appears roughly seven times when mentioned in conjunction with tax credits. According to Scalia, “[i]t is bad enough for a court to cross out ‘by the State’ once. But seven times?” Even Roberts admits his divorce from the natural reading of the phrase in order to cement Obamacare.

This decision is monumental in more ways than one and has devastating effects. But more so than Obamacare becoming the law of the land, there is greater significance behind this decision. The Court has demonstrated it is ready and willing to breach the Constitution and violate the cornerstone of our country’s founding: separation of powers. By acting well beyond its scope, SCOTUS has blatantly joined the executive branch in making the law--a responsibility reserved for Congress only.

The decision further solidifies the growing concern that the current regime is beyond a doubt acting without constitutional authority. Not only has the Court taken on the role of the legislature more specifically, it has taken on the role of Congress’s power of the purse. In ruling “state” means “federal,” the Court rewrote Obamacare to authorize the IRS to spend billions of dollars in tax credits for these federal exchanges.

Scalia, in his dissent, remarks the “parody” of the decision when he said, “today’s decision makes of Hamilton’s assurances to the people of New York: ‘The legislature not only commands the purse but prescribes the rules by which the duties and rights of citizens are to be regulated. The judiciary, on the contrary, has no influence over...the purse; no direction...of the wealth of society, and can take no active resolution whatsoever. It may truly be said to have neither the FORCE nor WILL but merely judgement.’”

If there is one assurance this decision gives, it is that the Court will gladly man the post that should be guarded by Congress. In the words of Scalia, the logic and outcome of this decision can at best be described as “pure applesauce.”

Does RULE OF LAW technically exist any longer in the United States? Oaths of office are broken by the Executive branch, Congress and the Supreme Court... and there are NO consequences or legal remedy exacted.

In my opinion, the United States needs what the British Parliament and Israeli Knesset both have: a LOSS OF CONFIDENCE VOTE... which requires a new and prompt election to be held. Multiple instances of TREASON have been committed... and no consequences... except commentator reports on the news.

Interesting that an article directly above this one praises the Supreme court for its decision on the EPA but then in this article there is a ridiculous claim that they are " acting without constitutional authority". None of us figured the right wing media would simply be quite after both of last week's ruling but their reaction has been absolutely dumbfounding: that somehow since the supreme court didn't rule their way... well they must be unconstitutional then... or some other nonsense.

Conservatives lost last week... and they will CONTINUE to do so... End of story.

Suppose I rob a bank on Monday, and I don't rob a bank on Tuesday. Am I a bank robber or not? Sorry Mr Stone, but your semantics are flawed.

POPPYCOCK !!! The judges did not rule on the constitutionally of the ACA , but on their interpolations of what 535 members of congress wrote into the law as it was passed , while supplying their political opinions as to what they really meant to say . Why not just cut cards
for a decision and retire these forecasters of their unconstitutional Ethical Malfeasance.