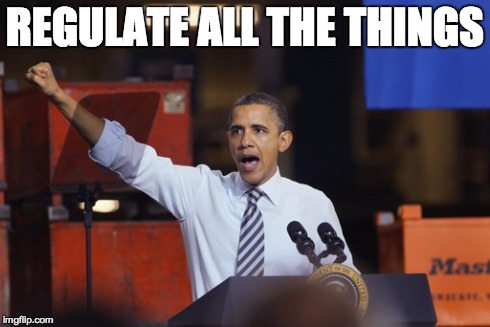 Consumers will pick up the tab for Obama's regulations

The regulatory burden Americans faced was further exacerbated in 2014, which President Barack Obama dubbed a "year of action," in which he would use his "pen and phone" to get around Congress to enact his agenda. Through executive fiat, the Obama administration proposed and finalized tens of thousands of new regulations last year, which, according to an analysis by Sam Batkins of American Action Forum, come with a $181.5 billion overall price tag.

"In 79,066 pages of regulation, Americans will feel higher energy bills, more expensive consumer goods, and fewer employment opportunities. The year was highlighted by EPA’s proposed 'Clean Power Plan” (CPP), which the administration admitted would raise electricity prices by more than six percent by 2020, not to mention the $8.8 billion price tag," writes Batkins. "Amazingly, the CPP was not the most expensive measure in 2014. EPA’s proposed ozone rule, which could force dozens of state and national parks into non-attainment, could impose $15 billion in costs."

While the EPA's economically destructive regulations received a lot of attention last year, the administration also issued new Dodd-Frank rules that, according to Batkins, "added $16.7 billion in total costs and more than 4.4 million paperwork burden hours." ObamaCare continues to be a regulatory nightmare, as well. The FDA's utterly pointless menu-labeling mandate, which was part of the Affordable Care Act, comes with a $1.6 billion price tag, though estimates elsewhere predict the cost will be significantly higher, and 2 million paperwork hours.

The administration published 39 rules that come with an annual cost of $100 million or more. These are the sort of rules that would require congressional approval under the Regulations From the Executive in Need of Scrutiny (REINS) Act. Though this measure, which was supported by FreedomWorks, passed the House in August 2013, the Senate, then controlled by Democrats, refused to bring it up for a vote.

It's highly likely that the REINS Act will be reintroduced in the new Congress, and it should be one of its top priorities. The regulatory state has long been out of control, regardless of which party controls the executive branch, and it's high time Congress -- the, you know, actual lawmaking branch under our Constitution -- reasserts itself.