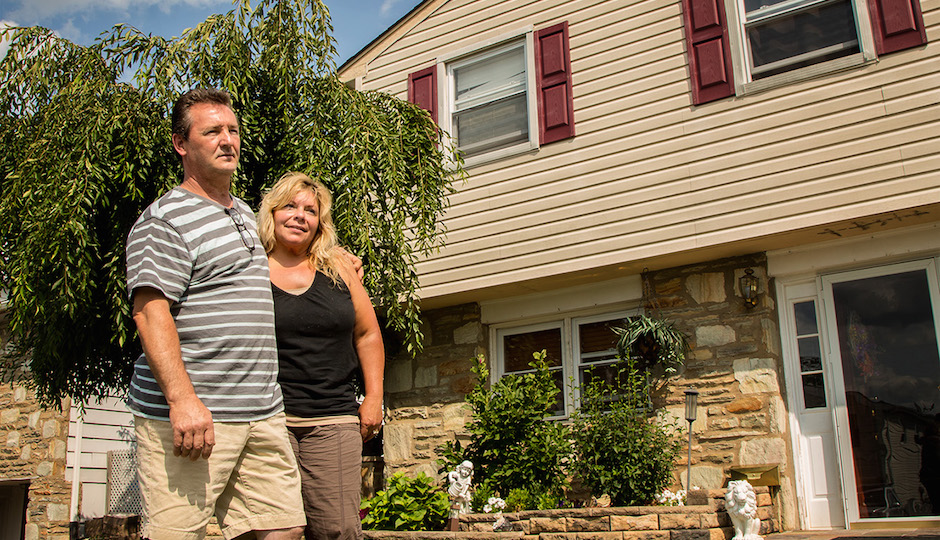 Christo Sourovelis was surprised, in May 2014, to find out that his 22-year-old son, Yanni, was selling $40 worth of drugs out of the family's suburban Philadelphia home. His son, who had never been in trouble before, was arrested and sentenced to a diversion program because of his status as a first-time offender. One would think that justice was served, with the young offender learning a valuable lesson and, hopefully, spared from being caught up in the system.

But not long after, Sourovelis was even more shocked when he received a panicked phone call from his wife, Markella, as local law enforcement stormed into their home declaring that they were seizing it. "We’re gonna break your walls. We’re going to break your pipes. This house is going to be ours," she recalls being told by the officers. "As he was explaining to me what was going on, there was people closing the doors with screws, locking them. They had the electric company here to turn off my electric and gas."

Neither Christo or Markella Sourovelis, or their two other children, were ever charged with a crime, but they were evicted from their home and onto the street because of the mistake their son made. "I didn’t do nothing wrong," Christo told CBS Philly. "I didn’t bother anybody, but still they came in and moved us out of our house."

Under Pennsylvania law, the Sourovelises did not have to be charged with a crime for their property to be subject to forfeiture. In an inversion of justice, the home is considered guilty until proven innocent by the property owner. This led one Pennsylvania judge to call the Commonwealth's laws "state-sanctioned theft."

Philadelphia has been particularly bold with its use of the Commonwealth's civil asset forfeiture laws. The Institute for Justice, a libertarian public-interest law firm, notes that the city "took in over $64 million in forfeiture funds—or almost $6 million per year" between 2002 and 2012.

The Sourovelises decided to fight the seizure, but when they showed up in room 478 at Philadelphia City Hall, they found that they did not have any real due process. Dubbed the "worst forfeiture court in America," there was no judge or jury present to hear their case, but rather a prosecutor who, because Pennsylvania law permits law enforcement and prosecutors to keep 100 percent of the proceeds from forfeitures, had a vested interest in going after the home. The legal process is designed to discourage property owners, including those who are innocent, from fighting a forfeiture proceeding.

In August, with assistance from the Institute for Justice, the Sourovelises and another family filed a class-action lawsuit against Philadelphia. The Sourovelises eventually received their house back after the city dropped the forfeiture proceeding, though the lawsuit is still ongoing. Thankfully, state lawmakers realize that significant reforms are necessary to protect innocent people from overzealous prosecutors and law enforcement.

State Sens. Mike Folmer (R-Lebanon) and Anthony Williams (D-Philadelphia) have introduced legislation, SB 869, that would require a criminal conviction before supposed proceeds of criminal activity or facilitating property can be forfeited to the government. There would be limited exceptions to this rule (e.g. terrorism, human trafficking, etc.).

“If these guys are using their properties to do illegal activity and they’re convicted of that, rock and roll, seize it," Folmer said in January. “That’s not the problem. The problem is due process actually being done."

SB 869 would not only eliminate the pernicious practice of civil asset forfeiture by requiring a criminal conviction, it would also limit how proceeds from forfeitures can be used, squashing the perverse profit motive often behind seizures. As proposed in the bill, forfeiture funds would be used first to reimburse costs of storage and selling forfeited property. Next, funds would be used to compensate victims of crime, pay attorneys’ fees and court costs of property owners who have prevailed in forfeiture proceedings. Any remaining proceeds would be directed to the operating fund of a county or the general fund of the Commonwealth.

Importantly, SB 869 ends the loophole that allows state and local law enforcement to send seized property to the federal government for "adoption" and receive 80 percent of the proceeds back. The bill does not prohibit the federal government from seizing property, or federal and local law enforcement working together and sharing in the proceeds, but it does require that the limitations on use of the funds would still apply, meaning that the profit motive is removed from the equation.

FreedomWorks applauds Folmer, Williams, and the cosponsors of this comprehensive civil asset forfeiture reform bill for stepping up to protect innocent property owners from government overreach and restoring the right to due process guaranteed by the Fifth Amendment. The Pennsylvania General Assembly should act quickly and decisively to pass this bill and send it to Gov. Tom Wolf.