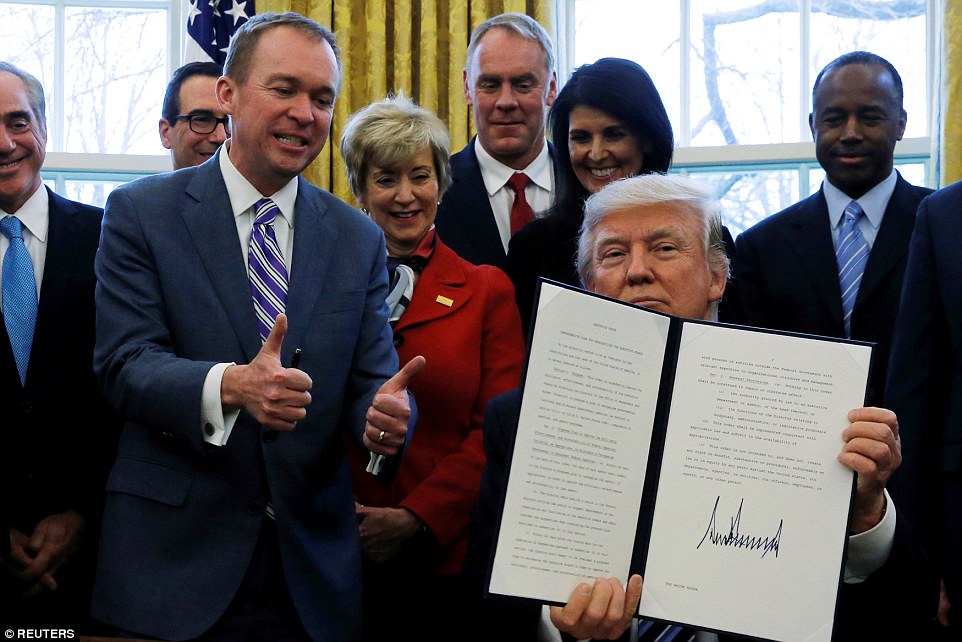 Cabinet departments and agencies have 180 days to submit reorganization plans to OMB Director Mick Mulvaney that will "improve... efficiency, effectiveness, and accountability." The executive order instructs Director Mulvaney to publish a notice in the Federal Register, allowing a public comment period. The public comment period will allow interested parties to offer suggestions on the plan, which may be considered when the plan is finalized.

While the Department of Education, under the control of the Obama administration, finalized and published the rule, Congress recently canceled it through a resolution of disapproval, H.J.Res. 57, under the Congressional Review Act. The White House has indicated that President Trump will sign H.J.Res. 57 into law.

In addition to looking for redundancies and inefficiencies in cabinet departments and federal agencies that could be eliminated, Director Mulvaney is instructed to propose legislative recommendations to achieve the goals of the plan. There are a few of existing pieces of legislation that could help move the ball forward on this plan.

Reacting to President Trump's executive order on Facebook, Rep. Davidson wrote, "I’m glad to see this executive order from President Trump. My Drain the Swamp Act is similar, but would ask agency heads to also develop plans for saving money by moving outside of Washington DC. It would be more than just a geographic change – it would be an opportunity for fundamental restructuring conversations similar to what could be accomplished under this order."

"I’m looking forward to the suggested changes that come from this action, and would encourage the agencies to go further and considering moving operations outside DC," he added.

Agency Accountability Act, H.R. 850: Introduced by Rep. Gary Palmer (R-Ala.), the Agency Accountability Act would require federal agencies to deposit revenues collected through fines, fees, or proceeds from legal settlements into the general fund of the Treasury. Between 2010 and 2015, according to a report by the House Committee on Oversight and Government Reform, federal agencies collected more than $83 billion. Only twelve of 34 agencies deposited these revenues to the general fund of the Treasury. This has effectively allowed federal agencies to create slush funds, free from congressional oversight.

Modern Employment Reform, Improvement, and Transformation (MERIT) Act, H.R. 559: Introduced by Rep. Barry Loudermilk (R-Ga.) the MERIT Act would make it easier to “drain the swamp” by removing federal employees based on poor performance or misconduct. In a Facebook Live with FreedomWorks, Rep. Loudermilk said that the White House is interested in the MERIT Act as part of an agency overhaul.