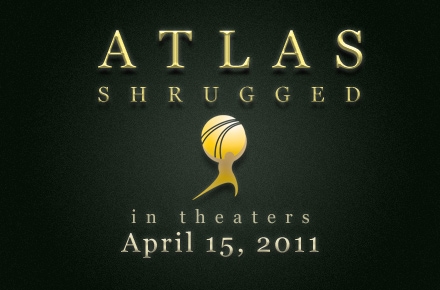 I am pleased to announce that during the Conservative Political Action Conference (CPAC), FreedomWorks will screen the world premiere of the motion picture Atlas Shrugged trailer. Visit the Official Atlas Shrugged Movie Web Site.

If you cannot make it to CPAC, the trailer will be release on the film's website on February 11th as well.

In 1957 when Ayn Rand published Atlas Shrugged, a dystopian novel about a world in which the burden of government over the producers of society grew too great, it quickly became one of the most influential works in literary history. Ever since the book’s release, fans have been clamoring for Atlas Shrugged to finally make it to the silver screen. Well, the wait is over.

With Part 1 of the film adaptation set to hit theatres on April 15, I urge you to spread the word about this inspirational film to family, friends and your network of grassroots activists. You can even use our new online networking platform, FreedomConnect, to form Atlas Shrugged viewing parties for the film’s release. Don’t miss out on this important opportunity to learn more about the philosophy of individual liberty!

Get the FreedomWorks Special Edition of Atlas Shrugged III

Half a century ago, Ayn Rand penned one of the world’s most vibrant and enduring books on the dangers of a too-powerful government and the importance of individual freedom. Yet despite its popularity and influence, it took until 2011 and the rise of the Liberty Movement for anyone to successfully adapt this remarkable novel for the silver screen.

Harmon Kaslow on Atlas Shrugged and the Free Market

With the release of Atlas Shrugged Part II on DVD, we get a chance to focus again on the power of government to keep people from pursuing and achieving success.

2
11/14/2012
Demand Atlas Shrugged In a Theater Near You on April 15!
"http:\/\/www.freedomworks.org\/content\/demand-atlas-shrugged-theater-near-you-april-15?social=facebook_share"
null
http://fw-d7-freedomworks-org.s3.amazonaws.com/styles/thumbnail/s3/te_social_media_share/fw_default_0.jpg?itok=35IWEBMb
Blog

Demand Atlas Shrugged In a Theater Near You on April 15!

Responding to fan support for the highly anticipated release of the Atlas Shrugged movie, over 70 theaters nationwide have already agreed to show the film on April 15th.  Click here to see if there's a theater near you showing Atlas Shrugged, and if not, click the "demand it" button to request a showing in your area. FreedomWorks has been at the center of a huge grassroots push to get Atlas Shrugged shown in as many theaters as possible. Producer John Aglialoro believes we can get the number of theaters up to 300 by the film's release on April 15th. Click here to get involved with the campaign.