What is a Regulation?: A Guide to the Rulemaking Process

How does rulemaking begin?

Laws enacted by Congress give rule-making authority to regulatory agencies such as the EPA or the SEC. Some laws give general authority, some attempt to solve problems.

All proposed rules are filed in the Federal Register. This includes a document evaluating the problem the regulation would solve. Agencies publish a bi-yearly "Regulatory Plan" that should announce future rule-making. But many proposed rules are unexpected or reactionary.

Rules are proposed not only to solve problems but also to shape public opinion or to control business activities.

What is a proposed rule?

A proposed rule is submitted to the Federal Register for public comment and possibly Executive Branch review before it becomes a regulation.

Rules are not subject to Congressional review except for in extreme cases. Some say this gives regulatory agencies more power than Congress.

Rules are not laws. The power to issue regulations is a delegated authority. The proposal of a rule is intended to increase the efficiency of a law. But our laws do not stop crime. This is not how our criminal justice system works.

Commenting does not work the same as voting. The process is not a ballot initiative. It is an evaluation of public opinion, new data, persuasive arguments, questions, and criticism.

Every comment helps combat the epidemic of regulatory overreach. The overreach of government regulatory agencies, combined with their vast powers of discretion, can take away our right to property, harm our small businesses, and endanger our individual liberties.

One last point to consider: the dangers of regulatory over-reach go far beyond the belittlement of our Constitutionally guaranteed rights to life and property. Regulatory overreach severely harms our nations economy.

What happens to a final rule?

In the last step of the rulemaking process, agencies publish changes to the Code of Federal Regulations (CFR) and publish the final rule in the Federal Register.

After publication, a new regulation enters a phase of compliance and review. This is when agencies enforcing a rule issue "guidance documents" to those who will be affected. 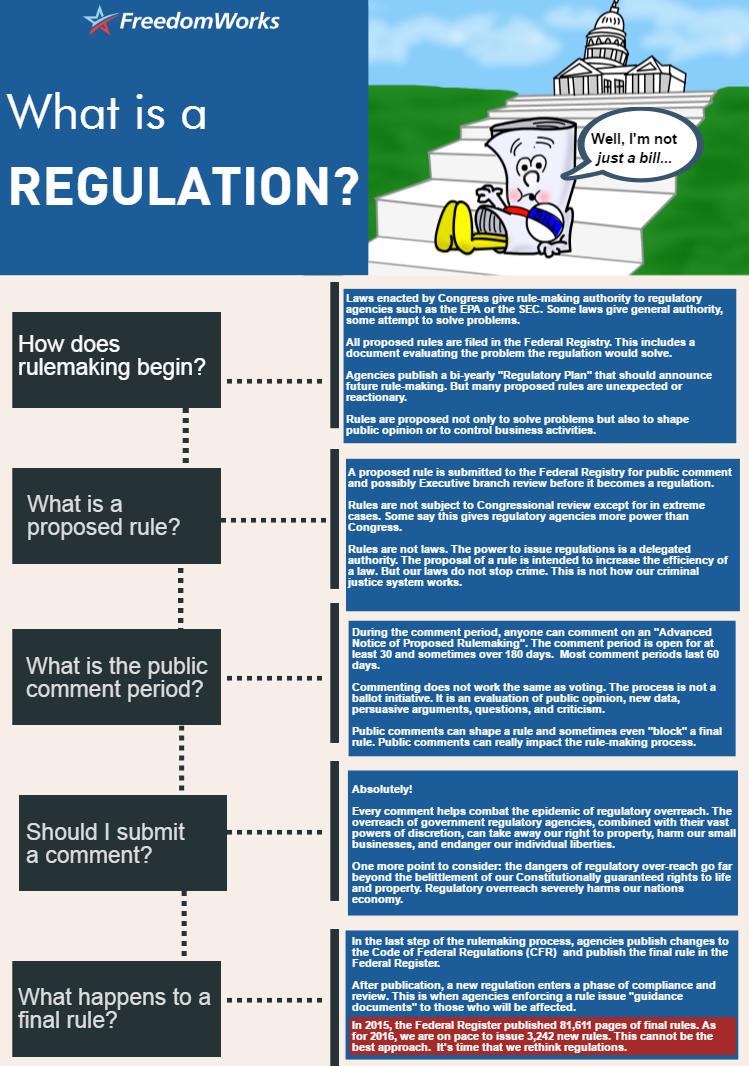