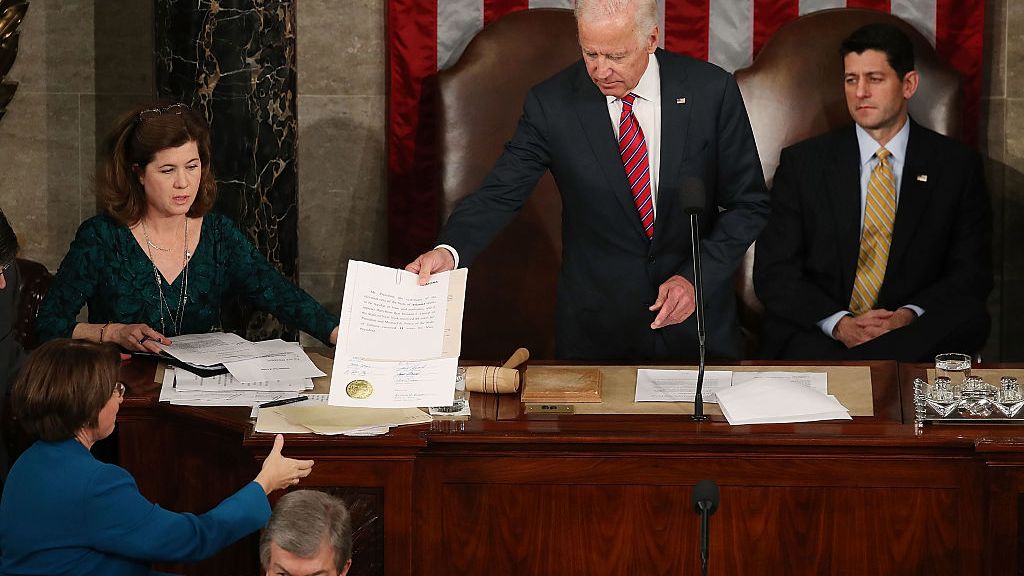 During a CNN town hall on Monday, Sen. Elizabeth Warren (D-Mass.) called for abolishing the Electoral College. She said that “every vote matters,” adding that “the way we can make that happen is that we can have national voting and that means get rid of the Electoral College.” Sen. Warren isn’t alone.

Rep. Steve Cohen (D-Tenn.) has introduced a constitutional amendment that would make his state virtually irrelevant in presidential elections. H.J.Res. 7 would abolish the Electoral College. The winner of a presidential election would, instead, be determined by the popular vote. The proposed amendment is not the first of its kind, but the effort to abolish the Electoral College has picked up steam over the past several years.

Article II, Section 1 of the Constitution defines the process for the election of the president. Electors are chosen to cast ballots by the respective political parties in their state. Alexander Hamilton explained the thinking behind the Electoral College in Federalist No. 68. This process may vary by state. Although a voter is casting a ballot for president, in reality, he or she is voting on the slate of electors, who will cast their ballots in a manner prescribed by state law.

The day on which electors are required to meet and cast their ballots is in statute, 3 U.S. Code 7, which states: “The electors of President and Vice President of each State shall meet and give their votes on the first Monday after the second Wednesday in December next following their appointment at such place in each State as the legislature of such State shall direct.” Electors for the 2016 presidential election met on December 19.

The Electoral College has its quirks, of course. The election of 1800 was thrown to the House of Representatives. There was a stalemate between Thomas Jefferson and Aaron Burr, both Democratic-Republicans who each received 73 electoral votes. The House finally selected Thomas Jefferson as president on the 36th ballot after Federalist members from Delaware, Maryland, South Carolina, and Vermont abstained, denying Aaron Burr the White House.

The Twelfth Amendment would resolve the issues that came to light during this election. The amendment, which was ratified in 1804, required separate votes for president and vice president. Of course, the Twelfth Amendment didn’t solve the (non)issue of presidential candidates who win the popular vote but lose the Electoral College.

Perpetuating a national popular vote concept as a way to make sure that “every vote matters” just doesn’t pass scrutiny. A review of the election data from 2016 reveals that 50.8 percent of the votes that Hillary Clinton received came from the 100 counties that cast the most votes in the 2016 presidential election. (California has 12 of these counties, Florida has ten, New York has nine, and Texas has seven.)

Considering that there are more than 3,000 counties in the United States, this is an eye-popping statistic. In fact, Clinton won 86 of these counties on her way to winning a plurality of the popular vote. Conversely, Donald Trump received 29.9 percent of his total votes from these counties, and he won only 14 of them. These counties represent 40.5 percent of all votes cast in the 2016 presidential election.

Another issue with the National Popular Vote Interstate Compact is that it’s almost certainly unconstitutional. Article I, Section 10 of the Constitution states, “No state shall, without the consent of Congress...enter into any agreement or compact with another state.” According to the Council on State Governments, more than 200 interstate compacts are currently in effect. “Twenty-two of them are national in scope, including several with 35 or more member states and an independent commission to administer the agreement,” the group’s fact sheet notes.

A compact for a presidential election would undoubtedly have significant national implications and would be far outside the scope of what Congress has previously approved. “Although states sometimes did submit their compacts to Congress for ratification,” Hans von Spakovsky of the Heritage Foundation explained, “there has been an implied understanding that interstate agreements were legitimate as long as they had a limited, specifically local impact and did not affect national prerogatives.”

Supporters of the National Popular Vote Interstate Compact say that approval from Congress isn’t needed, although the group is pushing for approval. Von Spakovsky has the Supreme Court already an existing test that would likely require congressional approval of the compact. He also explained that the compact would be problematic because it’s tantamount to an Article V convention that “deprives non-participating states of their right...decid[e] whether the Twelfth Amendment, which governs the Electoral College, should be changed.”

Many say that the Electoral College is undemocratic and that a popular vote concept is democratic, which is why states should dump the former. Undoubtedly, some who make such statements also believe the Senate is undemocratic because it lacks proportional representation. Put simply, the United States isn’t a democracy; it’s a constitutional republic.

State legislators should work to defeat National Popular Vote Interstate Compact legislation. The Electoral College isn’t perfect, but it has served the United States well. Although partisan voters may not always like the outcome when their candidate loses a presidential election, the system has served the country well and will continue to serve us well as long as we stick to it.