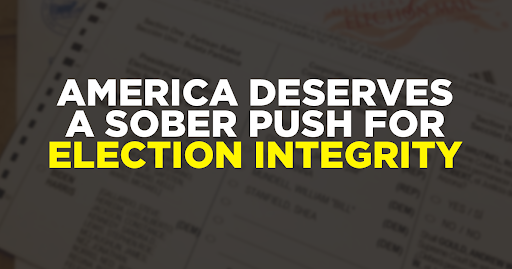 Following the chaos of the 2020 presidential race, a growing number of Americans are realizing that election integrity is a critical issue that must be addressed. Americans of all political persuasions largely agree on key principles to protect America's election systems: voter ID laws for both in-person and mail-in voting, cleaning voter rolls, and common-sense election administration safeguards.

For decades, leftist politicians and activists have relentlessly pushed legislation that has undermined election integrity in the United States. This effort culminated in the months leading up to the 2020 election, when Democratic officials circumvented the laws of their own states to ensure widespread mail-in voting, undermining the role of state legislatures in deciding the election codes of the states as envisioned in the U.S. Constitution and orchestrating the flow of hundreds of millions of dollars from Facebook founder Mark Zuckerberg into Democrat election offices in targeted states.

Now, President Joe Biden and his leftist allies in the Senate are vowing to pass H.R. 1, a disastrous bill that would undermine, if not destroy altogether, the integrity of elections nationwide.

It's time for forward-looking, common-sense election reform. That's why FreedomWorks has created the Center for Election Protection, which aims to ensure that our nation's elections are free from partisan interest interference, that only legally eligible voters are allowed to vote, and that the integrity of the secret ballot is preserved.

The events of 2020 must not be repeated going forward or Americans' trust in the nation's election systems will continue to decline.

FreedomWorks will involve our millions of grassroots activists directly in these efforts to protect and preserve our election process, particularly in areas that have been traditionally dominated by Democrats. We have all seen what happens when control over election administration is placed in the hands of power-hungry leftists.

Conservatives must fight back by participating as election officials and workers and serving as trained poll watchers and election observers. We cannot allow the leftist monopoly over election administration in various cities and states to continue.

In the major urban areas dominated by the far left, there are few Republicans serving as election workers, examining the legitimacy of ballots being tallied, or ensuring that county employees are following the duly enacted election laws and procedures. If leftist election administrators are not checked and counterbalanced, election outcomes at all levels of government are at risk of being tainted by partisan interference.

FreedomWorks will be identifying, training and encouraging patriotic conservatives to fill these important election office positions across the nation to truly provide a check on the massive influence of leftist operatives in the election process.

There is no question that restoring confidence in our elections will be a difficult task. Considering what we witnessed last year, it's not a surprise that millions of voters spanning the political spectrum are distrustful of the election process and have little confidence that those in power will take the steps to remedy the problems from last year.

In fact, Democrats Nancy Pelosi and Chuck Schumer and their underlings in the House and Senate are intent upon codifying into federal law the very problems that resulted in the post-2020 election distrust that we are now seeing. H.R. 1, a takeover of America's elections being pushed by the radical left, was recently passed in the U.S. House without a single GOP vote in favor. Now, one of the most radical bills in American history is before the U.S. Senate.

H.R.1 would prohibit photo identification for voting, mandate Election Day voter registration, dramatically expand mail-in voting while restricting all security measures related to mail-in voting, infringe upon the First Amendment rights of every American, and force every state to succumb to the radical left's plans to transform America's election systems to favor their chosen candidates.

Only by engaging in the fight, entering the arena, and opposing the radical leftist plans for our country can we protect our democratic republic. Citizens must increase their involvement and oversight of the election process if we are to maintain free and fair elections and regain control and restore confidence in our electoral process.

FreedomWorks activists will be leading the fight for election integrity in the months and years to come.

Truly, now is the time for every good American to come to the aid of his/her country. There is no time to waste.

Cleta Mitchell is the Chairman of the FreedomWorks Election Protection Initiative. Adam Brandon is the president of FreedomWorks.

how do i get involve?