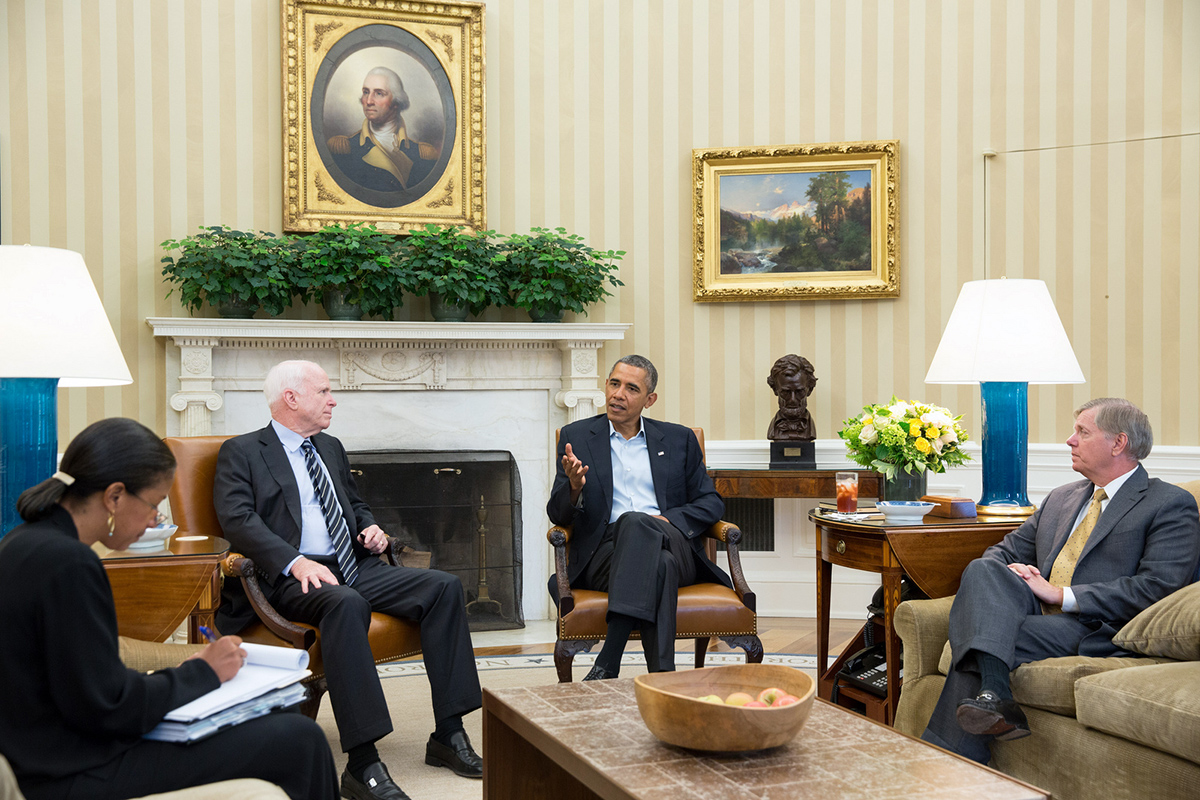 Graham currently has a mediocre 75 percent lifetime score on the FreedomWorks congressional vote scorecard, and a sub-basement-level 25 percent so far this year.

Since being sworn into the Senate in 2003, he has cast a number of extreme, "big government" votes, including for federal control of K-12 education (No Child Left Behind) and NSA spying on Americans (the Patriot Act). He also voted for big hikes in the minimum wage, the national debt, and federal taxes (the New Year's Day 2012 "Fiscal Cliff" deal). And of course, last fall he voted to fund Obamacare. If this is "conservative" I'd like to know what qualifies as "liberal."

The two most disturbing of Graham's votes, in my view, were to confirm President Obama's nominees to the United States Supreme Court, Sonia Sotomayor (2009) and Elena Kagan (2010).

The landmark Obamacare decision, NFIB v. Sebelius, radically -- and in my view, unconstitutionally and disastrously -- changed the relationship of US citizens to their federal government. The case was decided by a narrow 5 to 4 vote. Each of the five Justices who voted yes, including Kagan and Sotomayor, effectively cast the deciding vote.

Senator Graham went out of his way to put both appointees on the Supreme Court.

Therefore, it's not unfactual to say that Graham helped save Obamacare.

Sotomayor was confirmed by the Senate in August 2009 by a vote of 68 to 31. Nine Republicans crossed party lines to join all Democrats in supporting her -- Graham among them.

But it is his vote for Kagan that is most revealing.

At the time of her confirmation hearings in the summer of 2010, legal challenges to Obamacare already making their way through the courts. Everyone knew the stakes. She could provide the crucial fifth vote to uphold the unpopular and highly controversial law.

Kagan was asked whether a law requiring Americans to eat broccoli for their health would be constitutional -- similar to the way Obamacare required them to buy health insurance. Her answer would give senators an insight into how she might vote in the pending cases. She refused to answer. She also refused to say whether she would recuse herself in the case, even though it was known she had worked behind the scenes to enact and defend the law while employed by Obama's Justice Department and therefore recusal was in order.

Her refusal to address these questions should have been sufficient reason for every "conservative" senator to reject her nomination.

Kagan was confirmed on August 5, 2010, by a vote of 63 to 37. The voting was largely on party lines, with five Republicans (Richard Lugar, Judd Gregg, Susan Collins, Olympia Snowe, and Lindsey Graham) voting to confirm her, and one Democrat (Ben Nelson) voting against.

While Senator Graham's vote was not decisive, it was revealing. By joining a small handful of the Senate's most left-leaning Republicans to support Obama's left-wing high court nominee, the Senator from South Carolina made clear that he believed that this loyal Obama partisan would make a good Justice for America, and that he did not consider her likely support of her patron's radical left-wing agenda a reason to vote against her.

Is the label "Obama Republican" too strong to describe Lindsey Graham? Based on his voting record, I would say it's exactly right.

Thanks for this substantive report on Lindsey Graham's record. It's what we need in our "little platoons" as we stimulate friends and challenge opponents.

Graham is nothing but a tool for the liberal establishment. He was actually caught plotting with Kerry & the Obama administration to lobby Boehner & Republicans.. It's time we Fire Graham and replace him with a real conservative!!

Luckily we have a great challenger, Lee Bright. State Sen Bright has a solid 100% voting record, he has proven He is willing to stand up to big government establishment in both parties. We need him in DC to join Ted Cruz, Rand Paul, and others to fight the liberal agenda!! www.BrightForSenate.com