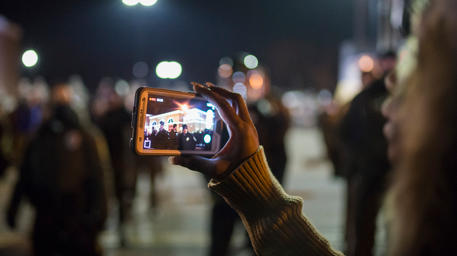 Filming the police is a good way to protect them... and yourself.

Accountability in law enforcement is one of the things that separates a free society from a police state in which the citizens live at the mercy of their government. Police are given unique powers unavailable to the rest of society, including the ability to wield deadly force. Anyone at all concerned about liberty should at least be able to agree that such authority bears watching.

Some legislators in Arizona, however, don’t see it that way. State Sen. John Kavanagh has introduced a bill that would make it a crime to make video recordings of police officers. He justifies this by citing an incident that occurred 40 years ago, in which he, in his former role as a police officer, was distracted while making an arrested by someone talking to him. How a law that forbids filming is going to stop people from talking to police officers remains unclear, but Kavanagh seems to think that phones and cameras are distracting enough to make it impossible for police to do their jobs.

This is a really bad idea for a number of reasons. First, there’s the rare situation where law enforcement can go overboard and act inappropriately. In these instances, it’s best to have a video record of what actually happened, in order to uncover the truth.

It’s worth pointing out that this is as much to the benefit of police as it is for the general public. Without video evidence, a suspect can accuse a police officer who is behaving completely appropriately of abusive behavior. There is obviously a large section of the American populace that is ready to believe just about anything about a cop, and in the absence of exonerating video, many a good policeman can find his career needlessly ruined. Video recordings protect both the arrester and the arrestee from becoming a victim.

In this age of smartphones and mobile internet, it is easier than ever to maintain a government that is both transparent and accountable to its citizens. It is a mistake to try to roll back the wheels of progress legislatively to preserve an opaqueness that has never served the people well, and can only lead to misunderstandings and abuses of the system. Police should welcome the greater prevalence of video recording, knowing that those that do their jobs right will be safe from unjust accusations of police brutality.