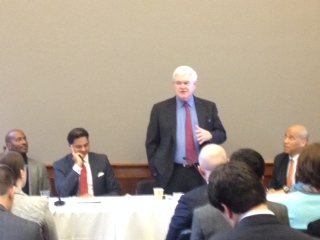 Former Speaker Gingrich spoke of bipartisanship on this issue and expressed his passion for providing guidance and education to nonviolent offenders, instead of sending them to prisons. He referred to prisons as “universities for crime,” since nonviolent offenders often become violent after a stint in jail. Former Speaker Gingrich and Rep. Reddy both described the economic inefficiencies of mass incarceration with a plea for fiscal conservatives to join the cause of prison reform.

Van Jones said that, while the attitude towards crime in America used to be “tough on crime,” both parties are shifting towards “smart on crime.” Senator Booker spoke about the caste system created by the barriers to opportunity and freedom that are created by the incarceration of nonviolent criminals, emphasizing liberty and American exceptionalism as reasons to take action on criminal justice reform.

Sen. Booker stressed that there was a “zeitgeist” on this issue right now, with people from “all corners” of the country coming together, and described his collaboration and agreement on this issue with powerful conservatives such as Rand Paul, the Koch brothers, and Grover Norquist. Booker noted that red states were leading the movement in what he called “common sense reforms” in their criminal justice systems and has worked with Republicans, such as Sen. Paul, in the past on criminal justice reform bills and initiatives.

Economic and emotional appeals were both made by panel members, but what was most impressed upon the audience in the duration of this panel was the amount of bipartisan support that exists for this issue. Rep. Gabbard stated that millenials are the least partisan generation, valuing results over political parties, calling young people to action on this issue regardless of their political affiliations.

I don't see how this could possibly accomplish anything when there are so many left wing COMMUNISTS like Van Jones and Cory Booker involved. Sounds like another Owe-Bama organizing effort to me. Newt apparently has lost his mind to be involved in such idiocy.