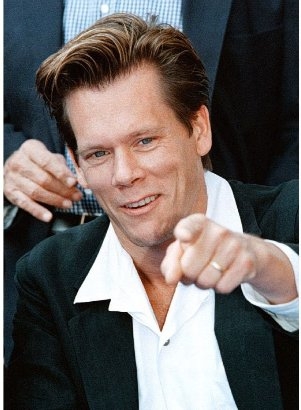 If you're a movie nut like me, you've probably played the "Six Degrees of Kevin Bacon" game. If not, let me explain the rules. First, pick an actor, any actor. Then link that actor to Kevin Bacon through the movies in which they've appeared. The smaller the number of links, the better.

The reason this game works so well is Kevin Bacon's work ethic. He works his tail off. According to IMDB, Bacon has 75 television or movie titles under his belt (not including documentary or "self" appearances) since his first role as Chip Diller in 1978's Animal House. With an average of more than two roles a year, every year, for 35 years, Bacon links to nearly every actor you can name who's worked in the past 60 years, at least.

Take a moment and ponder that -- two roles a year for 35 years in a highly competitive field is impressive. Thousands of actors would kill to have a work history that full. Bacon works everywhere, not just big budget movies, but the B and C movies and television. No role is too small. No gig deserves less than his best effort. He shows up, does his job as a professional, and builds on his considerable reputation as a solid actor on whom others can rely.

What does that mean for you, the grassroots activist? Let me give you three ways you can harness your Inner Bacon and crank up your activist cred.

1) Work where the work is. You will find far more opportunities to work on small projects -- a school board election, a petition drive, a city council vote -- than you will the big gigs. Plenty of would-be activists (and I confess here that in the past I've been one of them) shrug off those opportunities because they're not big enough. They believe they have the chops for something more grand -- they may be right! -- but until that big gig comes along they ignore dozens of chances to build the solid Baconesque reputation that brings those big gigs along more easily. There will always be more opportunities on the local and state level than there will be national opportunities (just look around on Freedom Connector in your state and city) and most of the latter go to those who have reaped their bags full on the former. If you aspire to work on the national level, get to work on the local level where all the work is. (tweetable)

2) Build your resume, and reputation, every day. One of the curious things I've noticed about state and local issues is how persistent they are. You can work every day on one issue and only rarely have a lean season. On the other hand, national politics is often driven by the Congressional calendar, election cycle, and poll numbers. Today the hot issue is immigration. Tomorrow it may be spending or national security or some issue that's way down the list right now but, for whatever reason, will come charging to the top of every politico's list. Local issues like the quality of your neighborhood schools, zoning matters, the role of local law enforcement, and property taxes are forever and every day. Stick your nose into one of those and you'll have more than enough work to keep you busy and your reputation as a hard and diligent worker will grow.

3) Every opportunity deserves your best work. I probably shouldn't have to say this. We all should understand, deep in our bones, that we ought to give our best no matter what. I'll admit right here that I haven't always done my best work. I've phoned it in at times. I've let people down who counted on me to bring my "A-game". Maybe you've done the same. Well, let's do better. No job is too small or obscure for our best, truly awesome work. Look at Kevin Bacon's resume again. He could easily have phoned in any performance after his roles in top-notch movies like Apollo 13, A Few Good Men, and Murder in the First.  He didn't. Neither should we. Harness the power of Bacon and let's do great things, what do you say?

0
07/06/2015
"Orwellian Oregon Wants To Define What A Journalist Is"
"https:\/\/www.freedomworks.org\/content\/orwellian-oregon-wants-define-what-journalist?social=facebook_share"
"Once again, we're debating who is a real journalist, and who is not. The result of this determination could have much greater impact than anyone realizes."
https://fw-d7-freedomworks-org.s3.amazonaws.com/styles/thumbnail/s3/field/image/type%20writer%20keys.jpg?itok=rlMOejOF
Blog

0
01/17/2014
How Can You Benefit from FreedomWorks University? Find Out!
"https:\/\/www.freedomworks.org\/content\/how-can-you-benefit-freedomworks-university-find-out?social=facebook_share"
null
https://fw-d7-freedomworks-org.s3.amazonaws.com/styles/thumbnail/s3/te_social_media_share/fw_default_0.jpg?itok=35IWEBMb
Blog

How to Make Tweetable Links to Share Your Best Work

The most interesting challenge for any content creator is how to make what you create as easy to share as possible. People, and I include myself in this, are lazy and most social media platforms have fed this. New-style retweets, reblog buttons, and one-click share options abound, which has gotten us used to sharing content with only a click or two.