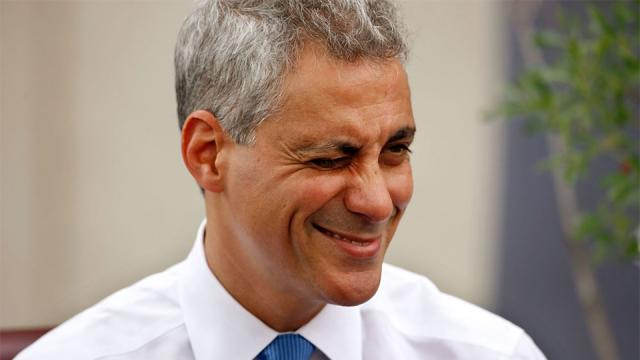 A government debt is a government claim against personal income and private property – an unpaid tax bill. - Hans F. Sennholz

Chicago's government has thrust a huge debt upon it's citizens. Chicago has unfunded pension and medical promises of $33 billion, according to the Wall Street Journal.

Over a number of years, the union leaders funneled big, campaign donations to politicians. In return, Chicago's public employees received lavish benefits. In the short-run, who cared if there wasn't enough money being invested to cover the pension and medical promises? Nearly nobody, and certainly not politicians, union chiefs and the public employees. Always remember, popularly elected politicians always please their voting constituents at the expense of future taxpayers.

Hence, without sufficient money to pay for the pensions of Chicago’s police and firemen, Mayor Rahm Emanuel proposed a gigantic, property tax increase. The tax will bring $588 million in Chicago to be phased in over four years to cover the pensions. Thus today’s property owners will be coerced to pay for the past political manipulations creating Chicago's pension debacle.

These Chicago manipulations are a universal political ploy – a modern-day taxation without representation, which is incredibly destructive to America’s future. Other unpaid tax bills include Social Security and Medicare, which are also being obliged upon our children and grandchildren.

First Amendment Under Attack in Illinois

Illinois, Illinois, Illinois. What has happened to you? How could the land of Lincoln stray so far from the principles of freedom? Every time we look, the state government is up to something shady. While the graft usually takes place in Chicago, today’s example comes from Bellevue, just outside of St. Louis.

A Predictable and Stable Legal OrderA government with moral and legal authority promulgates written rules and universally, impartially and uniformly enforces those rules, which provides a predictable and stable legal order on which to base economic and personal decisions. The law prevails, not the proclamation or arbitrary decision of a ruler, government bureaucrat, enforcer (e.g., policeman) or judge.

As a parent, I look forward to parent-teacher conferences.  Even if the news is bad, and sometimes it is, it’s better than the information I’m getting at home. The daily school conversation with my children usually goes like this - “How was school, what did you do today?” I ask.  “It was fine, I’m hungry,” is usually the response.  My children are typical, from what I understand, in that the only thing they will open up about are social issues; and even telling me about their social lives will sadly, most likely end during middle school.

26,000 teachers went on strike in Chicago Monday, leaving 350,000 students stranded in a political battle they’re too young to understand. Here are seven things you should know about the city’s public school system and the union that controls it.

Chicago Teachers Want More Than There Is

The Chicago Teachers Union went on strike Sunday night, citing such issues as compensation, health benefits, and job security. Chicago is out of money, the State of Illinois is even more out of money, and in tough economic times, no one has job security.