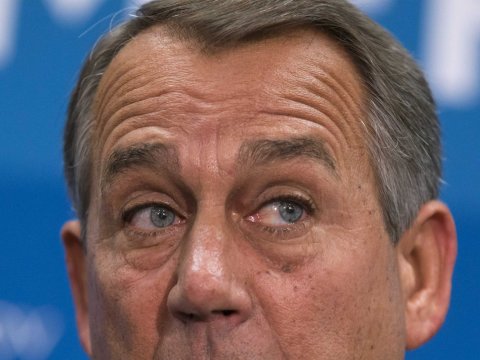 John Boehner may have secured his third term as Speaker of the House, but he can’t be too pleased with how much effort it took. Boehner’s supporters are acting like there was never a chance he’d fail to secure the necessary votes, but their projections of confidence appeared tinged with an edge of panic, as the Speaker personally called a number of on-the-fence Members yesterday seeking assurances of their vote.

Although plenty of arms were reportedly twisted in order to secure the needed votes, the establishment also got an unexpected boon from tragedy. Because New York Democratic icon Mario Cuomo’s funeral overlapped with the Speakership vote, ten Democrat members of the New York delegation were absent from Congress today, along with a few other Members delayed by snow or personal affairs. Consequently, Boehner needed only 206 votes (rather than the usual 218) to achieve a majority of the Members present for the vote. He got 216. That’s cutting it close.

If leadership had failed to secure the needed majority, additional ballots would have been cast until someone reached the magic number of votes – a process which would have been deeply embarrassing to Boehner. Even if he eventually kept the Speaker’s gavel, House conservatives would have been in a position to extract major concessions.

Even in defeat, the principled conservative wing of Boehner’s Republican caucus certainly has his attention now. Which is the point in the end – Boehner can’t as easily ignore conservatives if he fears them. And it’s harder to him to suppress those meddling limited-government troublemakers by kicking them off committees or killing their amendments if he knows there’s a big group of them willing to oppose him in unison.

Speaking of those brave troublemakers, enough praise cannot be bestowed upon the 25 Republicans who were willing to stare down leadership’s powerful glare head-on. This is especially true for the three men who formally entered themselves as opponents to Boehner for the Speakership – Congressmen Gohmert, Webster, and Yoho. Be sure to thank them for being willing to stand for real leadership - their votes took major political courage, and Boehner's retribution has already begun.

And those guys would never have been willing to take a stand if not for the amazing outpouring of grassroots support that paralyzed the House switchboard and may have actually melted the phone lines of several dozen offices. Grassroots activists making their voices heard (loudly!) are the only reason why this vote came so close.

Thank the Congressmen that stood on principle against Boehner
Tags Speaker John Boehner
Log in or register to post comments.
2 comments

We still cant trust him..... If he was a democrat we would circle the wagons and talk about how good he is. But he is a Republican. He needs to gooooooo

It is time for the Balance of Powers to be Restored and the States have the Authority to do it. What's more they actually listen to their Constituents sometimes (Washington never does).

Momentum is building in the Texas State House where my State Rep will sponsor the Resolution to call for an ArticleV Convention of States at the open of the Session. I am working with a local group of Texans to educate and encourage other State Reps to support the effort. See our campaign here: http://igg.me/at/TXCOS

The Lessons from Plan B

If President Obama and Senator Reid were actually negotiating in good faith, then one could argue that Speaker Boehner's Plan B was an acceptable, if unpalatable, compromise.  After all, it permanently extended the current tax rates for very nearly all Americans, eliminating the annual game of chicken in Congress over whether our taxes will automatically increase.

Key Vote NO on Speaker Boehner's "Plan B" Tax Plan

Dear FreedomWorks member,As one of our millions of FreedomWorks members nationwide, I urge you to contact your Representative and urge him or her to vote against Speaker Boehner’s “Plan B” tax plan.  This bill, being offered as replacement language for H.J.Res. 66, would prevent automatic tax rate increases for most individuals, but would allow taxes to automatically increase for some higher-income Americans.

Washington, DC- FreedomWorks issued a Key Vote today urging members of Congress to vote “NO” on Speaker of the House John Boehner’s fiscal cliff “Plan B.” The plan offers a permanent extension of current income-tax rates for all except those earning $1 million a year.