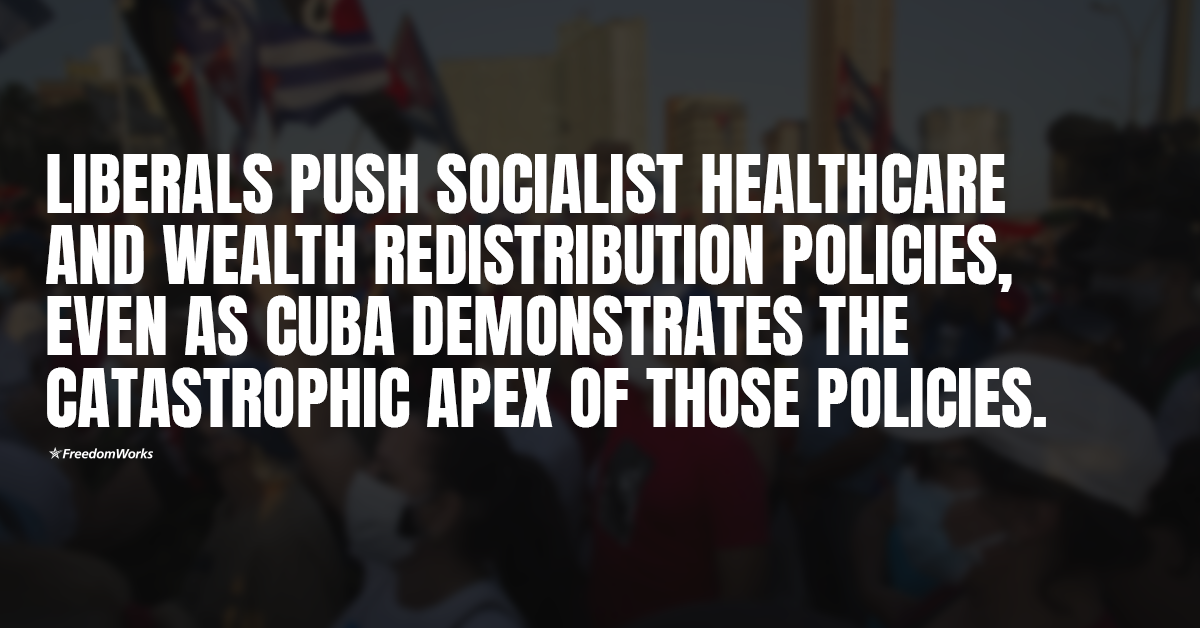 It may have taken a few days for the Biden administration to finally begin using "communist" to describe the government of Cuba. Still, the State Department's initial claim that the protests were purely due to COVID-19 reveals a futile attempt to control the narrative.

The American Left clearly has a messaging problem when it comes to Cuba.

This problem became most clear on Wednesday, when the Left’s primary activist wing, Black Lives Matter, issued a verbose statement that blamed Cuba’s situation not on the authoritarian regime, but solely on the U.S. trade embargo. The statement just barely stopped short of declaring outright support for the Cuban regime.

Apparently, BLM is fine with police violence, so long as it’s carried out by a regime founded on Marxist principles. It’s also ironic that BLM's solution to Cuba’s economic woes is simply a better trade relationship with capitalist, "racist" America. This "solution" is an admission that communism is inherently flawed.

But let’s be clear. What’s going on 90 miles south of Florida does not come down to the embargo, and it’s definitely not all because of COVID-19. Instead, it's the result of a criminal regime that continues to repress its people violently. A regime for which the American Left is often happy to carry water.

The surge in COVID infections on the island nation has exposed its crumbling health system. But Cuba maintains robust trade relationships with countries all around the world. It's thus an awful, last-ditch argument by the Left to insist that the communist regime needs to rely on free market trade with America in order to prosper! The U.S. embargo does not restrict medicines. Moreover, doesn't the European Union have a high-value goods export market for Cuba? The basic point is that this regime would inhibit prosperity even without an embargo.

The Left's immorality on Cuba doesn't end there.

Homeland Security Secretary Alejandro Mayorkas has now made clear that the United States will refuse Cuban refugees. Such a cold rebuke of Cubans fleeing violence makes clear that if Democrats cannot profit politically from immigration, immigrants best stay home. One might ask, seeing Cuban Americans' strong support for the GOP, whether Democrats perhaps don't want to hurt their chances at the polls.

The Cuban people’s struggle for freedom exposes the Left’s facade of benevolence. American liberals push socialist healthcare and wealth redistribution policies, even as Cuba demonstrates the catastrophic apex of those policies.

This crisis has shown that Democrats are not the clean, altruistic party that they claim to be. It has also exposed to a wider audience the sinister underbelly of groups like BLM. Maybe more people will take note.

Peter Vicenzi is the director of communications at FreedomWorks.

Saturday marks the 200th anniversary of the birth of Karl Marx. His work with Friedrich Engels, The Communist Manifesto, and Das Kapital inspired communist uprisings in Russia, China, and several other countries. Despite the death and destruction under communist regimes over the past century, some are inexplicably still debating Marx’s legacy leading up to the anniversary of his birth.

San Juan County, Utah is the poorest county in Utah and one of the poorest counties in the United States. The large majority of the land in the county is owned by the federal government, meaning that locals already face severe limits on economic activity, hardly what a struggling county needs. Now rich, out-of-state environmentalists in San Francisco want to inflict even more pain on the citizens of San Juan County. These environmentalists are urging the Obama administration to undertake a national monument land grab that would put much of the county off limits to productive use. Oppressing poor, rural Americans so that rich, city environmentalists can pat themselves on the back? Sounds like a project the federal government will be happy to help along.