Day 2: On the ground in Wisconsin!

Yesterday the Tea Party Express rolled through Kenosha and Milwaukee, and it was a huge success.

We hit the road early, where I became aware of a scramble to find a new venue for the event in Kenosha. Apparently, over night, the small business owner that had agreed to let us use their space for a rally had been threatened and bullied, and had put up a sign saying "Tea Party rally canceled". She was concerned, because she considers herself apolitical, and just didn't know what else to do.

We regrouped, and with the help of the local Tea Party leaders we quickly moved the rally a new location - Lincoln Park, just a few minutes away - and had a great event! There were several people from Chicago present, union workers included, a man who rode his bike all the way from Nashville and a crowd of over 300 who came out to support the recall effort in Kenosha. Despite the venue change, it was a great event! 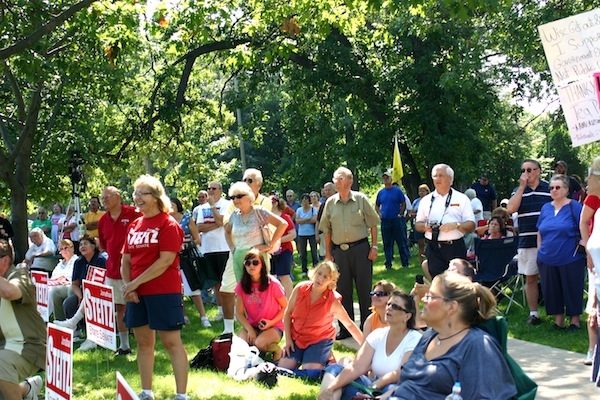 From there we headed to Theinsville Park outside of Milwaukee. We had another awesome crowd, and some great local Tea Partiers come out and speak. Vince Schmuki of the Ozaukee patriots fired up the crowd, and was a great voice for freedom lovers in Wisconsin. Campaign for Liberty had a strong showing as well, and Melba Morris-Page, a local bartender and freedom lover, was a highlight of the event. 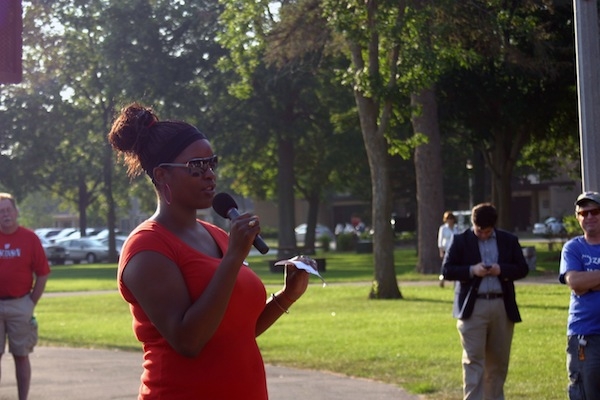 One thing that's worth mentioning is the number of union members that are at the rallies. I spoke to one woman in particular, a Teamster, who couldn't let her picture be taken because she feared for her job and her safety. The fact that people aren't free to speak up because of the union they are forced to belong to is just unacceptable. It's heartening to see people stand up to the bullying.

Even though there were bumps in the road, there were wonderful liberty-lovers out in force and they are ready to fight for the representatives who are doing the job they were elected to do! 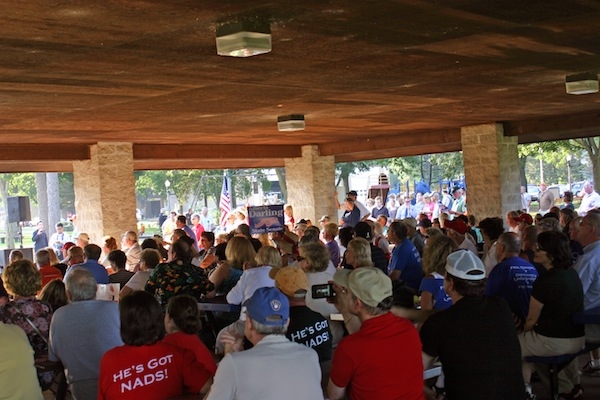 Today will be another big day - we're getting ready to take off for Fond du Lac, New London and Merril. There's more info here - come out if you're around, and help spread the word!

Help me understand why the bullies and thugs who are threatening people who want to have a Tea Party rally or just stand up for what they believe are not exposed and arrested, or at least their names, faces, dates and places published on a list. These are the same tatics the liberal socialist democrats and the communist use. We cannot let them succeed.

As a former soldier having spent 25 years defending the constitution and the American way of life. All of you make me proud again to see the American people standing up for their rights as a free and descent people should. I had all but given up hope after I retired in 1994 that I may have squandered my time for a people who just wanted the handouts. God Bless You All and Thank You for renewing my spirit. SFC Jerry Newnam ( US Army Retired)

God Bless you Tabitha & Amy for ALL that you are doing not only for Wisconsin, but ultimately for our country!! I'm following Wisconsin & keeping you all in my prayers & especially praying for the upcoming elections.

Just a short while ago I was so thrilled as Amy Kremer defended the Tea Party with great skill on CNN. I have followed the saga in Wisconsin since its beginning and have prayed for Gov. Walker often. To conclude my day
with your wonderful report is a wonderful way to end my day. Thank you so much for you wonderful work.

Thank you all, for all that you're doing! I'm in NJ, so was only able to (and did) donate. Keep up the good work; you're in our prayers!

The Lord is my light and my salvation,whom shall I fear?The Lord is the stronghold of my life,of whom shall I be afraid?When evil men advance against me to devour my flesh,when my enemies and my foes attack me,they will stumble and fall.Though an army besiege me,my heart will not fear...Psalm 27:1-3

Thanks for these updates. I registered to show my support to this group. Keep going, you are doing a great job!!

Congratulations - you are an inspiration for us all.

I applaud the work you are doing,may you continue strong, with peace and love in your heart. I am a supporter of the Tea Party and desire to get more involved in my area, South Florida. In my heart I knew this resistence to good was coming to the USA, but not in my life time. Now it is time for all good men/women to come to the aid our country.

Tabitha and Amy, thank you all so much for these news flashes from the road. I live in Alaska and cannot get to Wisconsin without TSA abuse, so I give and pray for the brave people of Wisconsin and all the on-the-ground volunteers.
Keep up the great American patriots work. Peace,