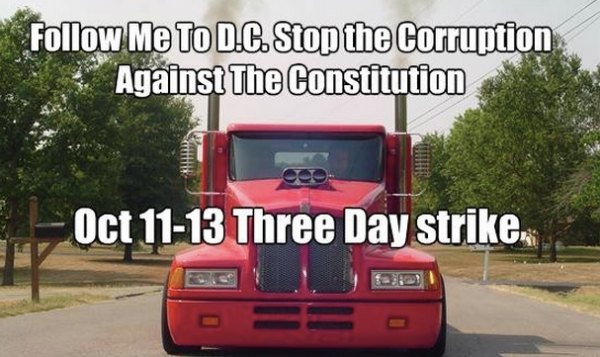 Beltway traffic is never fun to navigate, but starting Friday, it might be getting a whole lot worse. People around the country are getting increasingly upset with our government, which doesn't appear to be listening. With Washington continuing to spiral out of control, people are finding new ways to protest that can’t be ignored. A new group, Truckers Ride for the Constitution are organizing a rolling protest to see if they can get Washington to pay attention to their concerns.

The protest will be in the form of a three day ride across three lanes of traffic. Drivers will leave one lane open for emergency vehicles and will drive exactly the speed limit. They hope to draw attention to their disapproval of some of our so-called “leaders” in Washington, DC who are not upholding their oaths to defend the Constitution. Although there have been some false reports that they are looking to close down roads or have elected officials arrested, they have stated that is not the case.

Co-founder Ben Pam told the Washington Examiner that the group intends to "awaken the American People to the complete disregard for the Constitution and to bring a message to Congress that We The People demand to be heard. We do not intend to arrest anyone or blockade DC until Obama is impeached.” They are not looking for anything that drastic, they just want to be heard.

They are getting support from far and wide on Facebook, with nearly 63,000 likes and rapidly growing! Their own page and other pages have continued to pop up and grow in support of their cause. Some of the issues to which they hope to bring attention to are specifically related to trucking; such as the crash rating system and truck parking. The rest of the issues are what they call “Violations against ‘We the People.’” These includes issues such as the unconstitutionality of both Obamacare and the NDAA.

With 7,000 truckers confirmed for the ride, this is going to be hard for anyone in DC to ignore. Everyone deserves to be heard, and these truckers are determined to make that happen.

Done did all my shopping/stocking for the 3-day weekend today!! Like Monica, even if next to no one notices, I've heard it may help too and it's my own way of being in the shotgun seat alongside those gearjammers. Thanks for the claraification in your post about the how and why form that their protest will take Amelia. An outright blockade could be seen as a crime (not to mention pretty tough to pull off for 3 days). This just may be the attention getter that wakes a few 'distinguished' citizens up. 8's to ya fellas.....be strong, be safe.

Hope all goes well with this event! I will be shopping this week on Thursday instead of Saturday. I plan to stay away from buying anything between the 11th and 13th. I've heard this is a way to help out. Even if it's a small difference. I feel good doing it!

Does anyone have any other suggestions on how those who aren't able to attend could make a difference?

Thank you to all!

I stand 100% behind this effort. I intend not to do any shopping, banking or buying gas during this time. I went to DC three times and I feel that I have never been heard.
People with the means and time to go to DC and be apart of this, please do so or help others go and make our voices heard.
I pray that God will watch over everyone.
Safety and peace