This week, Democrats are pushing a bill that would increase taxes on the profits of American companies with foreign subsidiaries. President Obama states that:

For years, our tax code has actually given billions of dollars in tax breaks that encourage companies to create jobs and profits in other countries. I want to change that.

Supporters claim that the corporate tax hike will protect American jobs by supposedly encouraging businesses to stay in the United States. However, Obama’s counterproductive plan will likely drive more businesses out of the US while taking even more money out of the American economy. Microsoft CEO Steve Ballmer has already declared that “if the President’s plan is enacted, Microsoft would move facilities and jobs out of the U.S.”

The United States already has one of the highest corporate tax rates in the world. As shown in the Project America chart below, Japan is the only developed nation with a higher corporate tax: 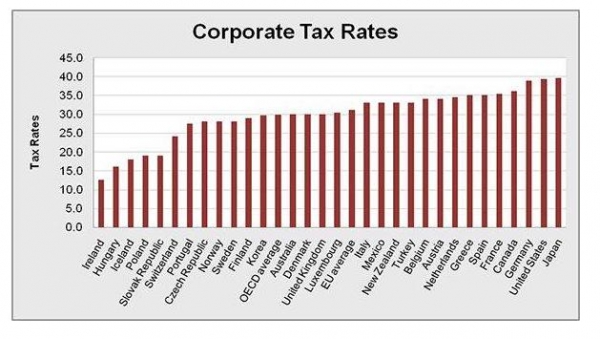 President Obama’s plan would end the deferral of foreign income by forcing companies to immediately pay US corporate taxes on any profits earned. According to the Wall Street Journal:

We're all for increasing jobs in the U.S., but the President's plan reveals how out of touch Democrats are with the real world of tax competition. The U.S. already has one of the most punitive corporate tax regimes in the world and this tax increase would make that competitive disadvantage much worse, accelerating the very outsourcing of jobs that Mr. Obama says he wants to reverse.

The Obama administration should focus on the reason why businesses are moving operations overseas in the first place. If the goal is to increase businesses inside the United States, the best way is to encourage companies to stay is to decrease the exorbitant corporate tax rate. Even Obama’s economic advisor Paul Volcker found in a recent report that:

As long as the US corporate tax rate is 80 percent higher than the OECD average, there is a great incentive for companies to move to a country with a lower tax burden. At a certain point, it becomes sensible for businesses to be more cost efficient by escaping the punitive US corporate tax.

Despite the high US corporate tax rate, the revenue Washington collects is lower than most relative to the size of the economy. As the chart below shows, the United States raises less revenue from corporate taxes than most countries with lower tax rates. 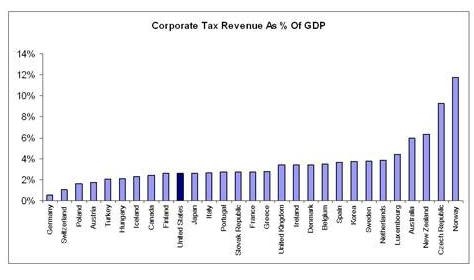 For instance, foreign companies have massively invested in Ireland which has a low corporate tax of 12.5 percent. As a result, Ireland collects more corporate tax revenue as percentage of GDP than the United States whose corporate tax is 180 percent higher.

As a U.S Treasury report reveals, employees and consumers are the ones who bear the cost of corporate taxes. A Heritage Foundation study finds that the high US corporate tax rate severely hurts employment. According to their study, the full repeal of corporate taxes would likely generate 2 million jobs and $280 billion more in real gross domestic product.

The Real Threat to American Manufacturing

Since the 1890s The United States has led the world in manufacturing. For more than a century, America has consistently produced more manufactured goods, measured in dollar value of goods produced, than any other nation.

The president recently announced plans to crack down on what he calls "corporate tax abuses."  He is seeking another $200 billion out of companies over the next ten years that do business internationally.  Whether he calls it closing a loophole or a tax hike, it will have the same effect as raising taxes by $200 billion on American businesses.  That might cause the elimination of more jobs, drive companies to more tax-competitive countries, and slow business in the United States.  Government should not tax and spend more, especially in a recession.