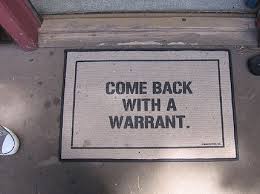 A warrant is granted by an neutral and detached magistrate if the case satisfies the standard of probable cause. Probable cause is an objective belief that the search will likely yield evidence of a crime. This belief is typically supported by affidavits, or written statements under oath, from the officer or the informant to the judge or magistrate. Then, if the standard of probable cause is satisfied, a warrant is issued. It is also worth noting that applying for a warrant is an ex parte process; the owner of the place being searched does not have input in the consideration of whether or not to grant a warrant.

The warrant sets parameters around the search, as general searches are unconstitutional. One parameter typically set by the warrant is that of the exact geographic area that may be searched. Data, however, can be collected in many locations as cell phone data is transmitted to service sites and can reside in the Internet of Things. These parameters also set limits on when the search can take place and can set an expiration date. When dealing with digital property, data challenges this concept. Historical data obtained on one day can reveal years of information. In the physical world, this is typically not the case. In other words, a search should only be able to collect information that is relevant to the time and the nature of the investigation. Data can be far more revealing. All data that is revealed during a search is not necessarily admissible.

In obtaining a warrant, the officer must specify the type of evidence a search is likely to produce. For example, if a search warrant is granted for the purpose of finding weapons, the officer cannot also search for drugs. However, if during the course of a search an officer finds an object that is evidence of another form of criminal activity, that object can be seized during the search. This does not necessarily mean that this evidence (known as “fruit of the poisonous tree”) is admissible, as there are a huge range of considerations based in precedent. These considerations are made in accordance to reasonable expectation of privacy. In other words, they take into account how much privacy should be expected. With data or digital property, this is where things get really complicated.

Searches of data are less outwardly invasive -- it is the scope of the data itself that constitutes invasiveness. Physical objects seized in a search are often deemed inadmissible. This happens far less often with the large amounts of data that is swept up during a search. In the case that the data collected is deemed far-reaching, there are several end-run arounds this principle. For example, the third-party doctrine can be used argue that there was no expectation of privacy because the data was knowingly and willingly transmitted to a third party. We will continue to explore how Fourth Amendment protections are being eroded by principles that are ill-suited for the digital age.

The right to due process shall be preserved in the digital realm.