The Fight For School Choice in Pennsylvania

Despite the fierce opposition from powerful teachers’ unions, the school choice movement is growing across the nation. Most recently, Pennsylvania State Senator Anthony Williams (D-Philadelphia) introduced the Opportunity Scholarship Act (SB 1405) that would expand educational options for children. The bill would allow low-income children trapped in chronically failing schools to attend the school of their choosing. In order to be considered “chronically failing”, a school must have at least 40 percent of their student body score below the basic range in reading, writing and math on a state assessment test. Poor students in these failing schools would be granted financial assistance that is equal to 100 percent of the state’s annual per-pupil funding in addition to 50 percent of the local school district’s annual per-pupil funding. Since Pennsylvania’s local school districts pay slightly over half of education costs, the Opportunity Scholarship would save local taxpayers money while giving poor children the opportunity to attend a better school.

The Opportunity Scholarship Act will rescue thousands of children tragically trapped in failing schools. There should be no greater priority for the politicians in Harrisburg than making sure every student in the Commonwealth receives a first-rate education.

However, the Pennsylvania State Education Association (PSEA) has continuously rejected any proposals to increase choice and freedom in public schools. According to the PSEA union, Pennsylvania public schools are struggling due to a lack of funding,

The Pennsylvania Constitution calls for a ‘thorough and efficient system of public education’ (Article 3.B). Pennsylvania, however, has fallen short of this constitutional requirement. Decades of insufficient and inequitable state funding have forced Pennsylvania public school districts to a system of choices.

In addition, the PSEA claims that public school education will only be improved through increasing tax dollars towards education:

…money matters in determining the quality of a child’s education…PSEA believes that if Pennsylvania is to improve public education for children…education funding must increase and the state share of that funding must be increased as well.”

Unfortunately, Pennsylvania school spending per pupil has skyrocketed with no signs of any educational improvement. In 2009, the cost of educating one student in a Pennsylvania public school for a year was an outrageous $14,420. In the poor performing inner-city schools, the costs are significantly higher. The Pittsburgh School District ranks as the 13th most expensive school district in Pennsylvania spending $19,883 per-pupil. The CommonWealth Foundation’s graph below shows the dramatic increase of Pennsylvania’s educational spending: 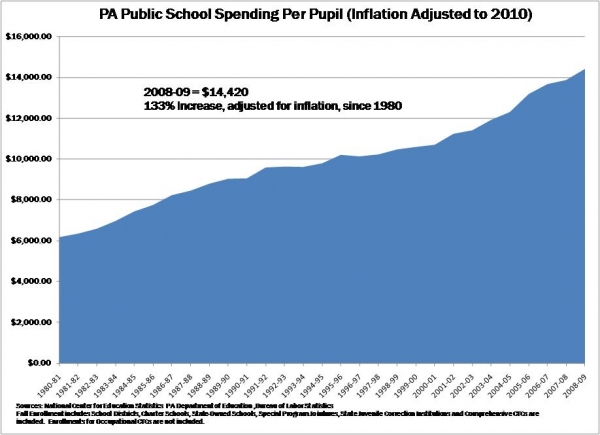 However, academic studies have shown that there is no correlation between increased per-pupil expenditures and student achievement. In Philadelphia, half of the students in the district fail to meet basic reading and math skills on a state administered exam. As the graph below depicts, students test scores on the National Assessment of Educational Process has remained relatively constant despite dramatically increased funding.

According to Senator Williams (D-Philadelphia):

If a charter school or a private school spending between $16,000 and $20,000 per student doesn't produce positive results, parents will withdraw their children from the school and the school will—deservedly—fail. But parents don't have the option of withdrawing their children from a failing public school. Today's system permits failing schools to continue, penalizing less fortunate children who only get one chance for an education.

Sadly, the Pennsylvania State Education Association wants to trap students in a costly “one size fits all” public school that has failed to meet their academic standards. Pennsylvania must allow parents to have more control over their child’s education. The Opportunity Scholarship Act would give students the freedom to opt out of their chronically failing school. The best solution to improving educational quality in Pennsylvania is to reduce cost and increase academic satisfaction by giving low-income students the opportunity to attend a better school that meets their personal needs.