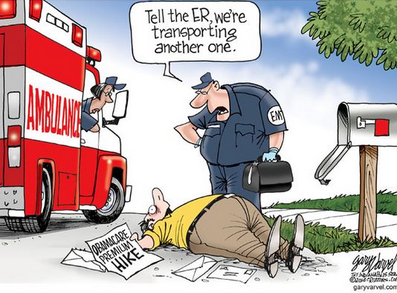 In case you have not already heard, health insurance companies operating on the ObamaCare exchanges in several states have requested big premium increases for health plans that will be available in the 2016 open enrollment period. Insurers have cited a higher utilization of healthcare as one of the reasons for the proposed increases, which must be approved by state regulators. In short, in many instances, they are paying out more in claims than they are receiving in premiums.

A report released on Wednesday by Agile Health Insurance offers some details on the extent of the rate increases. Insurers request increases on a plan-by-plan basis with justification for the hike required. The report is based on a review of products, which, as it notes, "is a collection of plans from the same insurer" and "may contain plans with different metal levels."

Some plans may not be utilized as frequently as others, meaning plans are either profitable or premiums received keep pace with claims paid out. As a result, proposed rate increases may stay in the low to high single digits. But in ten states, insurers have asked for double-digit premium increases for at least half of the health products offered on the exchanges.

One potential problem here is that consumers are automatically re-enrolled in the ObamaCare plans they selected. Though they are urged to shop to select different and, perhaps, more "affordable" plans, a recent survey conducted by Deloitte Center for Health Solutions found that 45 percent of ObamaCare enrollees switched plans. Those who did not saw premium increases of up to 20 percent.

Plans available for sale on the ObamaCare exchanges are required to offer certain benefits that drive up the cost of health insurance coverage. Though subsidies may diminish the cost impact to eligible consumers, taxpayers are expected to pick up the tab to the tune of $1 trillion between 2016 and 2025. Cost may still be an issue for many consumers, while others may not be thrilled about the sparse physician networks for available ObamaCare plans.

With this in mind, consider a thought recently offered by health insurance market analyst Robert Laszewski: "After all of this and two complete open enrollments, only 40% of those who are eligible for Obamacare have signed up -- far below the proportion of the market insurers have historically needed to assure a sustainable risk pool." He went on to note that "[i]f this were a private enterprise enjoying these kinds of benefits, and only sold its product to 40% of the market, its CEO would be fired."

Those who need coverage and/or cannot afford may find what ObamaCare plans offer attractive, but those who are used to getting more out of their coverage may simply decide to pass on pricey health plans that are not amenable to their financial situations or need for coverage. The result is a thinning out of the available risk pools that, you guessed it, leads to higher insurance premiums.

As always those maligning the ACA are lying.

I think ObamaCare should be repealed as it discriminates against those on SSDI and Medicare by forcing them to pay medical costs many times those of the general population, yet excludes us from Medicaid to help

My SSDI benefits are 160% of the FPL so I receive no subsidies, no premium assistance or prescription assistance. The marketplace would limit my premium to $135 a month for the entire family yet I pay $195 for just me. I shopped for plans on the marketplace and if I was not excluded from it due to the presence of a disability, I would be able to purchase a plan for $72 a month and total out of pocket of $2200 for both my husband and my self. Sounds affordable but you have decided SSDI/Medicare recipients are not entitled to affordable care.

In the marketplace I would be eligible for subsidies and cost sharing assistance up to 400% of the FPL but on Medicare, I am only eligible up to 150% and I am subject to the doughnut hole.

My husband recently had a stroke and went out of work. He was denied Medicaid for the time it took him to qualify for Medicare, and I also was denied Medicaid. Our combined out of pocket costs are over $1300 a month, and the MAGI calculation does not include medical expenses. If I had never worked and was on SSI instead of SSDI, my beneftis would be excluded from the MAGI calculation of income. However, all the tformerly working taxpayers who are now disabled have their benefits included. This is ridiculous and discriminatory

I am facing a 20% cut in benefits in January and don't know how our leaders expect SSDI participants to survive. I currently get 1943 a month, and without a cola will have to absorb any additional medicare premium increases. Medical expenses over $1300 eat up most of my income, leaving not much to pay my mortgage and other expenses, and I have been turned down for every other kind of aid.

I guess Congress has sent a very strong message to the American people with their structuring of the ACA and how it impacts SSDI. Do not go to work, do not get married and contribute meaningfully to society. Just spit out a bunch of kids to men you barely know and we will pay for everything you need in life. If you are stupid enough to put yourself through school, work at multiple jobs for decades until you physically cannot, or marry someone who did, then we will turn our back on you and laugh our heads off at your plight.