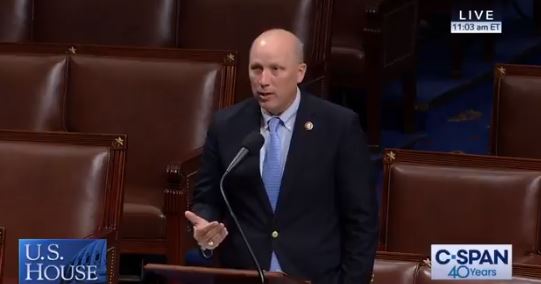 Rep. Roy is a freshman member of Congress who came into office in January 2019, but has had a first few months in office better for freedom and liberty than most any other member that we can recall. Perhaps much of this is due to his strong conservative background, serving as Sen. Ted Cruz’s (R-Texas) chief of staff upon Cruz’s election to the U.S. Senate in 2012.

Since that time, Rep. Roy has carried the mantle on the motto that Sen. Cruz started regarding Republican efforts to defund Obamacare in 2013: “How do we win this fight? Don’t blink.” On his embodiment of this motto, Rep. Roy’s most ardent supporters and his fiercest critics can agree. He has not blinked -- not even once -- on any issue that he is passionate about. Fortunately for his supporters in Texas’ 21st, in the whole state of Texas, and across the country, his issues center around those of free markets, limited government, and liberty.

One such issue that Rep. Roy has taken exemplary leadership on is healthcare, where he has fully embraced freer markets and less government regulation in the space as the north star solution to ever-rising healthcare costs. While most Republican members shy away from the Obamacare debate, he attacks the issue head-on and with conviction.

On Twitter during his campaign, after the election, and since taking office, he consistently promoted “#HealthcareFreedom.” By this, Rep. Roy rightly understands that the system as it stands creates too many barriers between patient and provider that obstruct quality care and too many perverse incentives that increase costs.

Put simply, as he said, “Our bloated healthcare system empowers insurance and government rather than people & doctors.” Every step toward this is a good one, and Americans should be thankful that Rep. Roy is willing and is actively fighting against efforts to maintain or worsen our healthcare system, no matter whether these efforts come from the left or from the right.

Similarly, he fights against efforts to increase spending by walking the walk of fiscal conservatism instead of just talking the talk, as so many other Republicans do. Recently, he led a Dear Colleague letter to Speaker Nancy Pelosi (D-Calif.) asking that leadership “#HoldToTheCaps” and not bust the discretionary spending restraints created by the 2011 Budget Control Act.

As he noted in the letter, which more than 40 of his colleagues signed onto, discretionary spending is not even close to the whole ballgame, writing, “We know that if we simply hold to current spending levels—even assuming today’s historically low-interest rates—spending on interest alone will surpass defense spending within 5 years. Medicare is slated to run out of funds by 2026 and Social Security is slated to run out of funds by 2035.” Republicans should look to members like Rep. Roy for leadership and innovative ideas to cut spending and shrink government across the board.

Often times, the fight to restrain government bleeds into a larger fight in Washington: Process. Beyond policy, Rep. Roy is truly fighting to change the way that our nation’s capital operates. Just over two weeks ago, he saw -- and took action to stop -- one of the swampiest leadership moves yet. With few, if any members present, after Speaker Pelosi sent House members home for the Memorial Day recess week, Democratic leadership moved to pass a $19.1 billion spending bill, H.R. 2157, with no offsets through the House by unanimous consent request. Instead of going home, Rep. Roy stayed in Washington and objected, demanding that, at the very least, a vote be held to pass such a large bill.

This move spurred chatter around what was going on in Congress when Congress wasn’t even there, featuring a significant amount of backlash against Rep. Roy, who took heat from Speaker Pelosi, who called his move “heartless,” as the spending bill was for disaster relief. Thankfully, he had a number of Republican colleagues to back him up, including Rep. Thomas Massie (R-Ky.) and Rep. John Rose (R-Tenn.), who came back to Washington during the recess week to object to two more similar unanimous consent requests to pass the same bill.

During all of this, Speaker Pelosi wined and dined at Disney, not finding the issue worth her precious time to come back to Washington to do her job. Conversely, Rep. Roy was one of the few members with the heart to set his own recess aside for the good of the country, proving himself a true leader. In doing so, he earned the praise of some of the most admirable champions in Congress.

Every day, Rep. Roy works tirelessly to further efforts to expose, drain, and reign in the swamp. In fact, just this afternoon, he has made a point to continue being a martyr for reform. Democrats have begun debate on a wildly partisan, $980+ billion spending bill in the House, H.R. 2740, to which they have allowed more than 100 amendments to be considered this week.

Rep. Roy is requesting recorded votes on each amendment that is considered, highlighting the fact that the House regularly passes legislation and amendments when few members are present in the chamber. This is a problem, and Rep. Roy is right to ask his colleagues to adhere to Article I, Section 5 of the U.S. Constitution which states that a quorum consisting of a majority of the chamber is necessary to do business in the House, and additionally to ask his colleagues to vote and make their position on policy known to the American people.

It is not meant to be easy to represent hundreds of thousands of Americans, as each member of Congress does. It is far past time that members of Congress be held accountable to the job they were elected to do. We are thankful to Rep. Roy for dedicating his time and efforts inside of the walls of the Capitol to doing just this, no matter how unpopular these efforts may be at times in the swamp.

FreedomWorks is proud to feature Rep. Chip Roy (R-Texas) as June’s member of the month to recognize and honor his extreme dedication to liberty. We look forward to continuing to see the good that his brave voice will do for our nation.