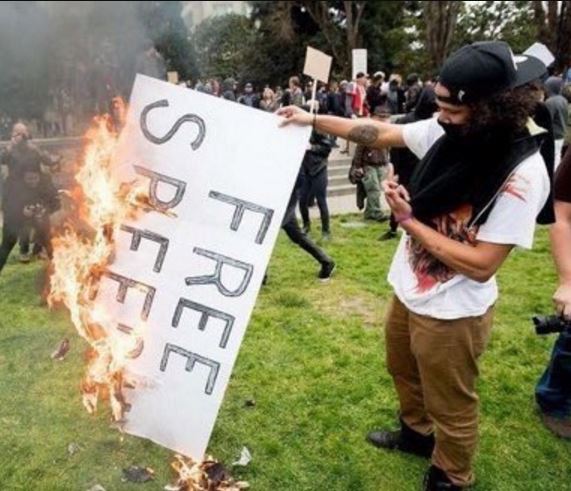 In 2013, liberty-loving Americans across the nation found out that their government was targeting them for increased financial scrutiny because of their political beliefs. The Internal Revenue Service (IRS) revealed organizations with terms like “Tea Party” or “Freedom” in their name were being singled out for additional review by the agency. This made life harder on conservative organizations filing for tax exempt status to operate as nonprofits.

In August of this year, a member of Congress, Rep. Joaquin Castro (D-Texas) posted a list of individuals in the San Antonio area who donated to President Trump. This was a member of Congress singling out his own constituents for harassment because they disagreed with him politically. It was a blatant and shameful form of intimidation.

Sadly, it seems that the left is not through trying to use fear to keep their opponents in the shadows. Rather than win the battle of ideas in a public forum, they would rather their political rivals be afraid to speak out under threat of bodily harm or economic ruin. This is a sad state for a constitutional republic that prides itself on freedom of expression to be in. Yet, it seems that that is the path upon which America now finds itself.

A leftist organization called Public Service Media Group, just launched a website called Racism Watch. Instead of trying to stop actual racism, what the site does is publish the names and home addresses of every single person in America who donated to the Donald Trump presidential campaign. This is dangerous. People will get hurt because of sites like this and it is time to put an end to it.

Radical leftists are now willing to assault journalists who don’t cover them favorably. They have defended the idea of “Punching Nazis” to make a political statement. The problem is that leftists now broadly classify anyone who disagrees with them as racists or Nazi sympathizers. They are coming for all conservatives and won’t make distinctions. Now, these same people who want to bring violence to you for your beliefs, want to be able to do so at your homes, where your family eats, sleeps, and lives. This is unacceptable.

Thankfully, the IRS, now under the Trump administration, is considering a rule that would protect the privacy and identity of all donors to 501(c)(4) political organizations. This is an important step to ensuring that mob rule and political violence does not govern discourse in the United States.

The FreedomWorks Foundation’s Regulatory Action Center is driving public support for this reform. It is vitally important that political arguments be won and lost on their merits, not because of physical threats or intimidation. You can make your voice heard by telling the IRS to protect donor privacy HERE or at the link at the top of this article. Together, we can halt the leftist mobs in their tracks and protect freedom of expression for all Americans.

ANTIFA and all the other Leftist Street Thugs are Domestic Terrorists, they are the Democrats very own Nazi Brownshirts or SA, doing their "dirty work"in the streets of our cities and on every campus in America- to intimidate and wipe out true Free Speech, right of peaceful assembly, opposing political views and diversity of thought-and what do the American people do? NOTHING!

Big heads up: a cloture vote to move forward on the DISCLOSE Act is scheduled in the Senate tomorrow afternoon. Click here to call your Senators and urge them to vote No on cloture to keep the DISCLOSE Act from becoming law. FreedomWorks sent this key vote to the Hill this morning urging a No vote on the bill.  Here's an excerpt:

0
07/26/2010
DISCLOSE Act Passes: Time to Turn Up the Heat on the Senate
"https:\/\/www.freedomworks.org\/content\/disclose-act-passes-time-turn-heat-senate?social=facebook_share"
null
https://fw-d7-freedomworks-org.s3.amazonaws.com/styles/thumbnail/s3/te_social_media_share/fw_default_0.jpg?itok=35IWEBMb
Blog

DISCLOSE Act Passes: Time to Turn Up the Heat on the Senate

We just received word that regretfully the DISCLOSE Act passed.  To see who did what, go to the roll call votes here.  As was noted yesterday, to cover the butts of any uncertain legislators, Reid has promised the Senate will take this up.  The DISCLOSE Act action center has been updated so that you can immediately turn your ire on the other chamber.

As you've probably read and heard on the news or talk radio, there is a bill looming in Congress that poses a serious threat to our freedom of speech, as protected by the First Amendment. H.R. 5175, the DISCLOSE Act, is the brain-child of Rep. Chris Van Hollen (D, MD-8), who as Chairman of the Democratic Congressional Campaign Committee is tasked with getting Democrats elected to Congress. The bill is a clear partisan political tool that would further expand government's reach into Americans' daily lives by restricting political giving and involvement in elections.