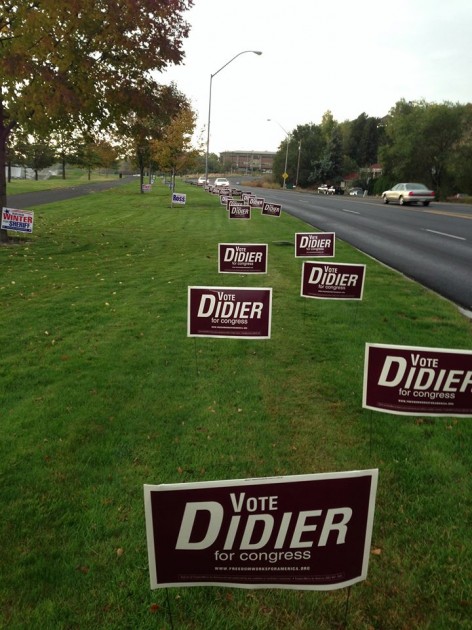 You may think that lost spirits and ghouls are allowed to roam freely on All Hallows Eve, or to vote on Election Day, but it looks that they were let out a little early this year. And they're already wandering around in Washington's Fourth Congressional District.

FreedomWorks for America is on the ground supporting Clint Didier, one of the liberty-minded candidates whom we endorsed in the 2014 election cycle. Yard signs our hardworking, dedicated grassroots activists placed in support of Didier in the district over the weekend had mysteriously vanished by Tuesday:

Autumn Torres, volunteer Yakima County campaign chair for the 4th District candidate, took photos of the signs that were apparently put up by the PAC FreedomWorks sometime Sunday afternoon or evening touting Didier for Congress. Many of them lined North 40th Avenue in Yakima along Chesterley Park — a high traffic/visibilty location that is a popular location for campaign placards and signs.

Earlier Tuesday, Torres received a message from a supporter who asked what had happened to the signs. Upon inspection, Torres noticed all of the Didier signs had been removed from their wire H-frames, which were left sticking out of the ground.

When asked if she thought they were intentionally removed as opposed to a random act of vandalism, Torres stated, “It seems to be the case. I certainly hope not. I do find it fascinating that no other (campaign’s) signs were affected.”

Sign-stealing ghouls from the political establishment aren't going to stop us from promoting Didier. We're distributing 4,000 yard signs, 10,000 pieces of literature, and we're planning to send more than 2,000 letters to undecided voters in the district urging them to vote for Didier. And, to date, we've spent $50,000 on online GOTV efforts.

Here's what the ghouls don't want you to know. Didier is the only limited government candidate running in WA-04. He's the only candidate who will take on President Obama's agenda. He's a vote to repeal ObamaCare, eliminate NSA spying, and roll back federal spending.