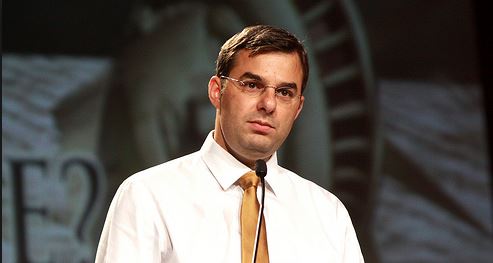 Washington, DC- FreedomWorks for America released recent poll results from Michigan’s third congressional district that show Rep. Justin Amash leading by 30 percent in his primary, with a 57 percent favorable rating. When those polled were asked to choose between Amash and Ellis, Amash received 53 percent support, compared to only 23 percent for Ellis.

“Congressman Justin Amash is the gold standard when it comes to individual liberty and constitutional conservatism. He has the support of grassroots activists across the district because of his commitment to truth and transparency,” said FreedomWorks for America President Matt Kibbe.

“Primaries exist to provide citizens with an opportunity to upgrade their representation in Washington, but in the case of Congressman Amash, constituents know that there is almost no room for improvement.”

Kellyanne Conway, whose firm, the polling company, inc., conducted the survey, observed, “Rep. Amash's poll position reflects the good will he has among GOP primary voters in his district.” Both the Congressman (57%-24% fav-unfav) and the Tea Party (61%-20% fav-unfav) enjoy better than 2-to-1 favorable-unfavorable ratings. Conway added, “Voters tend to reward principle and consistency.”

The poll results also revealed that moderate GOP challenger Brian Ellis has 16 percent favorability, with a 19 percent unfavorable rating. Ellis has spent over $400,000, yet is still unknown to over 30 percent of voters in the district.

Kibbe added, “It is not a good sign for the Ellis campaign when 32 percent of voters haven’t heard of you, another 30 percent have no opinion, and 19 percent don’t like you.”