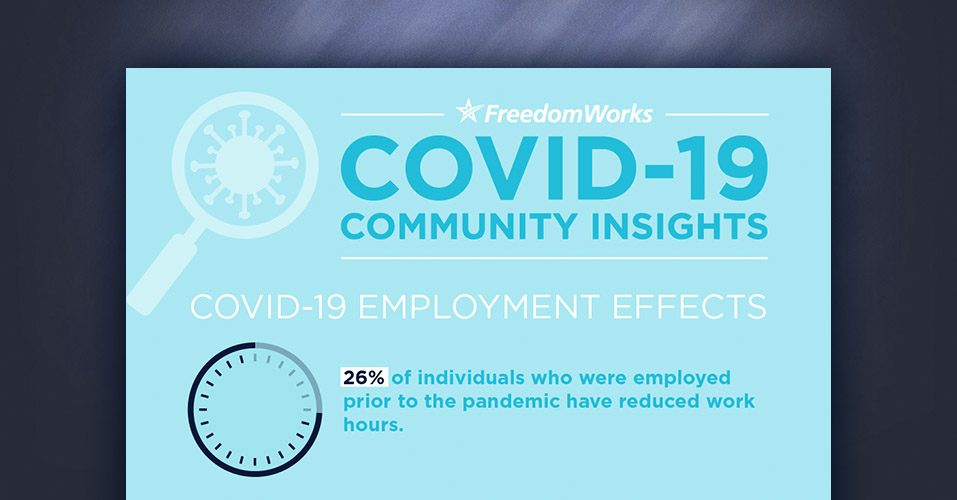 Over the past few weeks, the COVID-19 virus has swept across the nation, causing more than just small disruptions in everyday life in the United States. Understanding how Americans have had their individual lives distorted or destroyed by stay-at-home orders, layoffs, or the disease itself, is a step that must be taken to understand how the country can move forward. FreedomWorks, in response, has begun polling our audience on the effects of Coronavirus on their families, employment, and optimism.

The latest survey was conducted on April 1, and sought to measure these factors, while also inquiring about the opinions of our audience on proposed “Phase-4 relief” measures proposed by different legislators and officials. 1,279 individuals responded over the course of the 24-hour survey*.

The scale of unemployment and other industry effects caused by the closing of non-essential businesses are some of the primary concerns among Americans. When asked about how their employment has been affected by Coronavirus, 16 percent of previously full-time employees have been laid off, in addition to 28 percent of previously part-time employees who have been laid off. One-fourth of those who were employed prior to the pandemic have reported they now have reduced work hours.

Individuals who have had their employment affected by quarantine measures are more likely to be skeptical about government intervention. People who have been laid-off or have reduced work hours are twice as likely to have negative opinions of the $2 trillion Phase-3 stimulus package passed by legislators than those who were not affected. Most of these individuals cited “wasteful spending” as part of their concerns with Phase-3 legislation. That being said, about two-thirds of those who were laid-off support Phase-4 relief measures.

Respondents, however, are conflicted on what they would like to see in a Phase-4 package, agreeing more on what they do not want, as opposed to what they do. Not a single proposed measure received a majority of favorable votes. The proposal with the most support, with 48 percent of respondents in favor of the measure, is increased aid for medical facilities. More than 80 percent of the surveyed group reject pension increases, additional aid for state governments, and expanded medical leave. When respondents are segmented by their current employment status, disparities arise between the different groups. For example, individuals who were laid-off were approximately twice as likely to support increased unemployment benefits in Phase-4 legislation than those who are not unemployed.

Overall, a large proportion of the surveyed group specifically call for the government to restore everyday life. When asked to give suggestions for our next steps as a nation, 30% of individuals remarked the government should allow businesses to re-open and for America to continue moving forward from the chaos caused by COVID-19.

*This survey was randomized and conducted at the 95% confidence level, with a confidence interval of +/-2.75%.