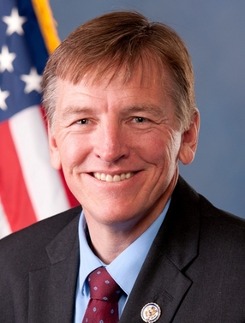 Paul Gosar represents Arizona's 4th District and is FreedomWorks' Congressman of the Month for February.

Rep. Paul Gosar was first elected to Congress in 2010, to what was then Arizona’s 1st Congressional District. After significant redistricting in the state, he has represented the 4th District since 2013. Gosar is a dentist and a member of the GOP Doctors Caucus, as well as the House Freedom Caucus. In 2015, he scored a 95 percent on the FreedomWorks Congressional Scorecard, marking his third time to qualify for a FreedomFighter Award.

Apart from his voting record, Gosar deserves special recognition for the leadership he has shown on a variety of issues, particularly on energy, environment, and property rights. 2015 has been quite a year for Rep. Gosar. He started off the legislative session by voting against John Boehner for Speaker of the House, and has followed that up by sponsoring bills to prohibit collective bargaining for IRS workers, cut spending from a variety of agencies, reduce funding for regulations, block tax increases for climate science, and stop green energy mandates.

But Gosar’s major crusade in 2015, and continuing into 2016, was calling for the impeachment of EPA Administrator Gina McCarthy. In House Resolution 417, Gosar lays out the case against McCarthy, citing three instances where she made false statements before congressional committees, an action which amounts to perjury and could be classified as the “High Crimes and Misdemeanors” necessary for removal from office.

Among McCarthy’s most blatant and harmful lies was her testimony the Waters of the United States rule, one of the most far reaching and invasive regulations in some time, did not expand the jurisdiction of the Clean Water Act. In fact, the rule, known as WOTUS, would reclassify many small bodies of water on private property as “navigable” for the purpose of regulation, making the EPA vastly more powerful and capable of intruding onto American’s private land.

By filing the articles of impeachment, Gosar is doing two things: First, he’s attempting to hold unelected, executive branch bureaucrats accountable to the people. Since agencies like the EPA now make de facto laws in circumvention of the U.S. Constitution. It’s high time Congress reclaimed some of its rightful authority from the president and his appointed flunkies.

Second, Gosar is reminding people that “impeachment” is not a dirty word, but in fact a tool given to us by the founding fathers as a necessary and proper way of removing government officials from office when they fail to serve the public. Impeachment was intended to be used frequently to keep government in check, not only as a last resort reserved for extreme emergencies. More representatives should follow Gosar’s lead and put regulators on notice that they, like any elected official, are accountable for their actions.

For his willingness to stand up for property rights in his state and hold government officials’ feet to the fire, we’re happy to name Rep. Paul Gosar FreedomWorks’ Congressman of the Month for February, 2016!