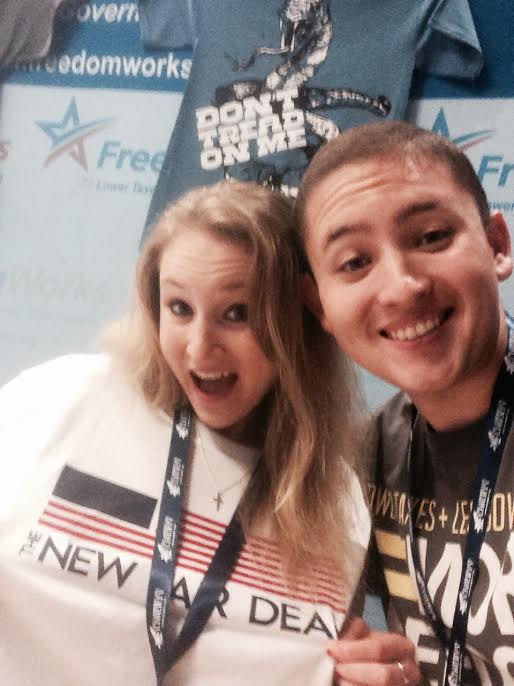 From July 29 to August 1, FreedomWorks went over to the Catholic University of America campus, where Young Americans for Liberty was hosting their 2015 annual national convention in the heart of Washington, DC. At the convention, several hundred liberty minded students, ranging from the ages of 17 to 25, descended onto our nations capital from every corner of our nation to learn, network, and discuss what they can do to help promote economic freedom and individual liberty in their lifetime.

During the event, FreedomWorks tabled at the convention hall where our staff dispersed tons of free pocket constitutions, bumper magnets, and other cool give-away items to help promote our organization, while talking one on one with the students about who we are as an organization and how they too can become a FreedomWorks activist and help promote liberty in their communities as well.

To help promote the key issues FreedomWorks focuses on, we handed out several hundred copies our civil asset forfeiture and mandatory minimum sentencing packets in order to promote our current initiative for justice reform; while continuing to spread the word about our continued efforts against Obamacare and Common Core. Additionally, in order to promote FreedomWorks new Instagram account, our staff gave limited edition FreedomWorks shirts to everyone who followed us, boosting our numbers by several hundred new followers by the end of the first day alone!

Many of the students that came over to talk to the FreedomWorks crew have at one point or another held events on their campus related to some of FreedomWorks core issues. One YAL member hosted an event where they had a giant sign which showed the current US debt, and from there discussed the rampant amount of unconstitutional spending taking place everyday. One student even planned on starting a blog targeting college age students discussing the growing issues surrounding Common Core and education reform throughout the country.

Needless to say, it was incredibly impressive and uplifting to hear how millennials from around the country are taking an open role in advocating for policies and practices that openly advocate for liberty in their communities and campuses.

FreedomWorks would like to say thanks to Young Americans for Liberty for giving us the chance to speak to a whole new generation of pro-liberty students who will go out into the world as adults and promote liberty in their lifetime!

FreedomWorks at the Arizona YAL convention

Hi, I’m Brady Bowyer, President of Young Americans for Liberty at the University of Nevada, Las Vegas, and a longtime supporter of FreedomWorks’ grassroots action to reclaim our liberty. This weekend, myself and a crew of activists from the Las Vegas area made the trip to Arizona State University to volunteer for FreedomWorks at the Arizona Young Americans for Liberty state convention. This was YAL’s first state convention in Arizona, and the turnout was great. Over 120 liberty-minded students and community members from around the region came to enjoy a day of activism training and hear great speakers.