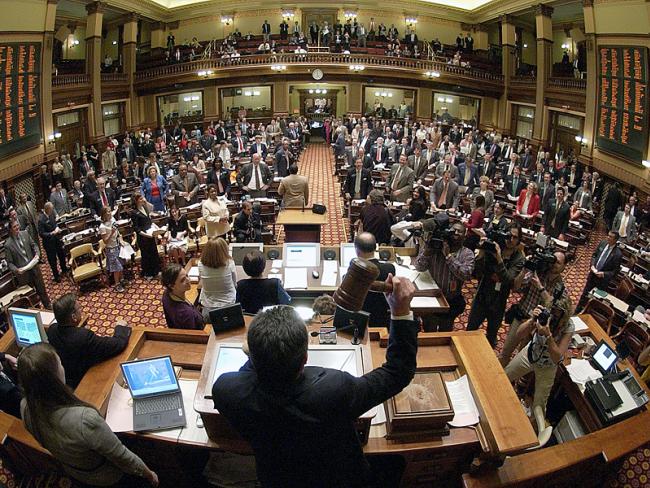 Washington, DC- FreedomWorks activists across the state of Georgia celebrate this week after the Georgia State House passed a bill that effectively nullifies ObamaCare. The bill, H.B. 707 passed with an overwhelming 115-59 majority and travels now to the State Senate, where a solid Republican majority should be able to pass the bill.

The legislation effectively nullifies ObamaCare by stopping state and local officials from assisting in the law’s implementation in any way. This would stop Medicaid expansion in the state, stop the health insurance exchange, and would make it very difficult for the Obama Administration to force Georgians into the one-size-fits-all federal program.

FreedomWorks President Matt Kibbe commented, “The passage of this ObamaCare nullification bill would not have been successful without the relentless efforts of grassroots activists across Georgia. They’re the ones that insisted their legislators listen and pass this bill. If and when the bill passes the State Senate, Georgia will be a model for other states who want to effectively push back against the federal health care takeover.”

FreedomWorks joined the efforts of grassroots groups like Georgians for Healthcare Freedom, setting up action alerts that drove hundreds of individual calls to legislators demanding they take a stand against ObamaCare.

how is this great what about the homeless in Georgia such as myself. I have been looking for a job for 6 months now and have not been able to find one and I have a very serious health issue which needs treatment and the avaiablelity of medicade to the low income was my only change for care so is the states way of telling me since I am homeless I am worthless and don't deserve health care. Great way to raise your children isn't it.

That is awesome! I pray more states will follow

Related Posts
Health Care Battle: What Can I Do This Week?
"https:\/\/www.freedomworks.org\/content\/health-care-battle-what-can-i-do-week?social=facebook_share"
null
https://fw-d7-freedomworks-org.s3.amazonaws.com/styles/thumbnail/s3/te_social_media_share/fw_default_0.jpg?itok=35IWEBMb
Blog

Health Care Battle: What Can I Do This Week?

Even though Congress isn't in town this week, and many people using these normally carefree days between Christmas and New Year's to spend time with family and recharge batteries for 2010, we're hearing from many folks who want to continue the fight against the government takeover of healthcare right through the holidays!  Everyone is wondering, what can I do this week?  Here are three things you can do to keep up the pressure:

Could Some States Nullify ObamaCare?

The Tenth Amendment Center is reporting that at least seven states have introduced legislation or constitutional amendments for 2010 that could effectively nullify national health care within their borders.They have even put together this handy map.