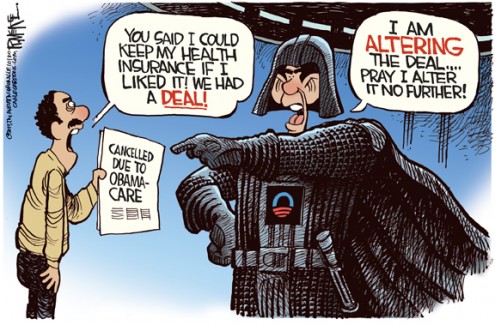 Udall wasn't telling the truth. Bureaucrats in the Obama administration wrote the grandfathered plan regulation so narrowly that it was impossible for that promise to come to fruition. Still, the Colorado Democrat had the opportunity to make things right. In September 2010, Sen. Mike Enzi (R-WY) offered a resolution of disapproval (S.J. Res. 39) to reverse the administration's regulation, warning that, if allowed to stand, it "will fundamentally change the health insurance plans of millions of Americans.”

Udall chose to ignore the warnings. He voted to kill the resolution, ensuring that most existing health plans wouldn't be extended grandfathered status. By August of this year, more than 344,000 Coloradans lost their coverage.

But the number of Coloradans who will lose their coverage will necessarily skyrocket. The Colorado Division of Insurance announced last week that more than 22,000 Coloradans will lose their health plans by the end of 2014, according to a letter from Commissioner Marguerite Salazar to state Senate Minority Leader Bill Cadman (R-Colorado Springs).

Though a small percentage of the cancellations involved an insurer that is no longer solvent, the remaining 18,783 policies were canceled without explanation, but ObamaCare's narrow grandfathered plans may be the culprit. "Carriers have had the prerogative, both prior to and since enactment of the Affordable Care Act (ACA), to discontinue plans for such business reasons such as updating their product portfolios, modifying their product offerings, and even withdrawing from Colorado or a Colorado market segment, so long as they notified the Division and sent consumers the appropriate notice," Salazar wrote in the letter. "Humana had the option to continue the plans they have canceled into next year."

This latest round of cancellations, though, are the tip of the iceberg. Because the "administrative fix" that President Obama announced in November 2013, at the height of the public outrage over the more than 4.7 million people who lost their coverage, only carries into 2015, 192,942 Coloradans will, barring an extension of the fix or repeal of the narrow regulations, see their health plans canceled by the end of next year.

As for Udall, he's been noticeably quiet about the looming cancellations. One has to wonder if his staff is, once again, bullying the Colorado Division of Insurance about the numbers rather than owning up to his role in the cancellations.