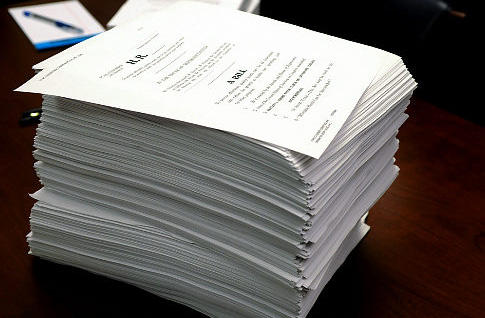 The House of Representatives has approved several bills that would limit and change the way the federal government regulates businesses. The Republican-backed measures were all passed by largely party-line votes; none are seen as likely to be enacted into law.

The legislation underscores "an increasingly symbolic thrust of legislation as Congress heads toward midterm elections," NPR's David Welna reports for our Newscast unit.

"This is an opportunity for us to show the American people that we are committed to restoring the trust in government," GOP Majority Leader Eric Cantor said today.

Those are warm, soothing words to the ears of free market fans but...they are just words. True, they are words in legislation, but it is legislation that will never be passed.

It's also a familiar tactic.

The promise from leadership is that once the GOP retakes the Senate then these moves will be less symbolic and more likely to become law. That only holds true if there is a majority that can override vetoes from President Super Pen, which isn't likely.

Just a couple of weeks ago, Mitch McConnell telegraphed the fact that he plans on being thoroughly useless until at least January of 2017.

Look, the problem is, we have a Democratic Senate. Fifty-five Democrats, 45 Republicans – we have a math problem. So, achieving the goal that we all would love to achieve is simply not attainable in the absence of relief at the polls with the American people flipping the Senate and then hopefully giving us a new president.

So the next time we have a hammerlock on the Executive and Legislative branches, we will finally start achieving something, according to the prophecy or something.

The problems on the regulatory front are many. Each new law to make our lives "better" brings with it some sort of federal oversight. Obamacare alone practically creates a separate federal mothership hovering over our lives and ready to attack.

And the Republicans don't have much of a small government track record in recent decades, even when they've had the majority. Many of the Republicans in Congress squawking about reduced regulation now participated in Medicaid expansion and a variety of other enlargements of the federal bureaucratic behemoth.

The expansion of that behemoth's reach always include layers of new regulations. And, as history informs us with countless examples, once the federal government is allowed to beef up, it doesn't do so well with dieting.

Sweeping changes are needed in Washington, but not just regarding regulation and legislation. We need to elect politicians who have the temerity to fight now for things that affect the future. The recent debt ceiling battles have been pathetic displays of purely political, short term you-know-what covering. The press and the politicians involved talked about tactics, elections, gridlock, Ted Cruz and a host of other things during the "debates". The one thing none of the people in charge seriously discussed?

In perfect world, we could elect a majority that didn't care about reelection and would go all "scorched earth" while attacking hyper-regulation.

In an even more perfect world, that majority would get reelected after doing so.