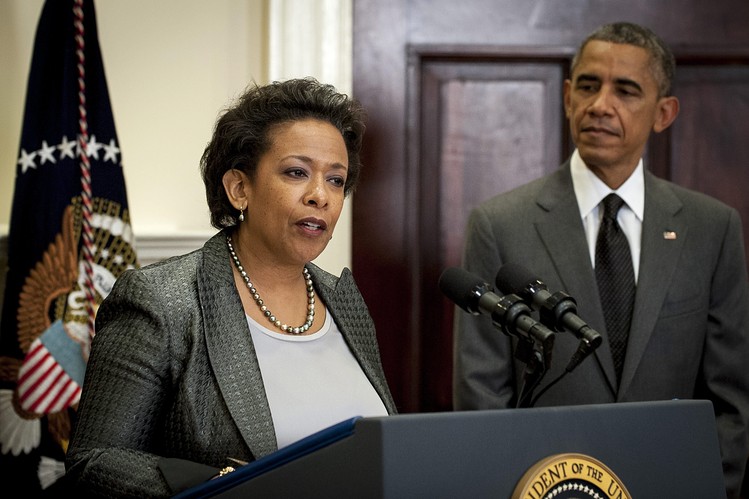 Among the issues raised were Lynch's views on federal civil asset forfeiture, a tool that the Internal Revenue Service and law enforcement agencies at all levels of government use to seize items that they believe have been used in the act of a crime. Her answers to questions about this practice earned the ire of Sen. Rand Paul (R-KY), who has now pledged to vote against her confirmation.

On Wednesday, Paul told Fox News host Greta Van Susteren that he would oppose Lynch's confirmation because of her views on civil asset forfeiture. He followed up his appearance with a formal statement the following day. "Mrs. Lynch has a track-record of violating the individual freedoms granted to us by our Constitution," said Paul. "She considers civil asset forfeiture to be a 'useful tool,' while I consider it to be an infringement on the Fifth Amendment."

Paul's opposition was stoked by Lynch's answers to a line of questioning about civil asset forfeiture from Sen. Mike Lee (R-UT), who sits on the Judiciary Committee. Lee asked Lynch, who, in her role as a U.S. attorney, has used civil asset forfeiture, about the practice in last week's hearing. Her answers to the Utah Republican's questions left a lot to be desired.

"I believe civil and criminal forfeiture are very important tools of the Department of Justice as well as our state and local counterparts in essentially managing or taking care of the first order of business, which is to take the profit out of criminal activity," Lynch told Lee. "With respect to civil forfeiture, certainly, as implemented by the Department, it is done pursuant to supervision by a court, it is done pursuant to court order, and I believe the protections are there." She would go on to call civil asset forfeiture "a wonderful tool."

Though those who use and support civil asset forfeiture say it's necessary to crack down on drug trafficking and organized crime, it has often been employed for more pernicious purposes. Civil asset forfeiture allows the IRS and law enforcement to use probable cause to seize property and money from individuals who are suspected of a crime but never charged or convicted. In many instances, the burden of proof falls on the person from whom the property was seized to get their stuff back -- a process that is fundamentally inconsistent with the Fifth Amendment's guarantee of due process and protection of private property rights.

Last month, outgoing Attorney General Eric Holder, in one of his final acts, catapulted civil asset forfeiture into the news when he announced restrictions on the Justice Department’s "Equitable Sharing" program. This little-known program allows law enforcement agencies in states with restrictive civil asset forfeiture laws to seize items and allow federal agencies to adopt them. The Justice Department would subsequently return up to 80 percent of the proceeds of the seized property.

The notion that "protections are there" is belied by the endless examples of abuse of these laws. In particular, there's an instance out of New York, one in which Lynch was involved, where a family-owned business, Bi-County Distributors, saw their bank account seized by the IRS because of deposits made under $10,000, which the tax agency saw as an attempt to skirt reporting requirements under the Bank Secrecy Act. In January, more than two years after the seizure, The New York Times reported that Lynch "signed off on Tuesday to a settlement that would return $447,000 seized" from the business.

Though the Justice Department's announcement was initially praised as a great start to civil asset forfeiture reform, civil libertarians who've been critical of the practice quickly pointed out that the there was still a very big loophole that would still allow state and local law enforcement agencies coordinating with federal agencies to seize items.

"[T]he program's reports to Congress indicate that 'equitable sharing' payments to state and local agencies accounted for about 22 percent of total deposits during those six years. That means adoptions, which the DOJ says represented about 3 percent of deposits, accounted for less than 14 percent of equitable sharing," wrote Jacob Sullum at Reason. "In other words, something like 86 percent of the loot that state and local law enforcement agencies receive through federal forfeitures will be unaffected by Holder's new policy."

Paul recently introduced the Fifth Amendment Integrity Restoration (FAIR) Act to address the loophole and restore due process. The legislation, which has also been introduced in the House by Rep. Tim Walberg (R-MI), would require law enforcement agencies to produce "clear and convincing evidence" that a crime has occurred and that seized items were used in the process of the act. The measure also establishes legal hearings within 14 days of the seizure in which the prosecuting attorney will have to prove probable cause or return the items to the property owner.

Additionally, the FAIR Act, which has bipartisan support, would reduce the incentive for the Justice Department to participate in the abuse of federal civil asset forfeiture laws by requiring forfeited property to sent to the general fund of the Treasury Department.

There's bipartisan support for the FAIR Act and Senate Judiciary Committee Chairman Chuck Grassley (R-IA) is on record in support of civil asset forfeiture reform. Though Republicans and Democrats don't agree on much, this is one reform that could and should be sent to President Barack Obama's desk.