Here's What You Need to Know About Brett Kavanaugh 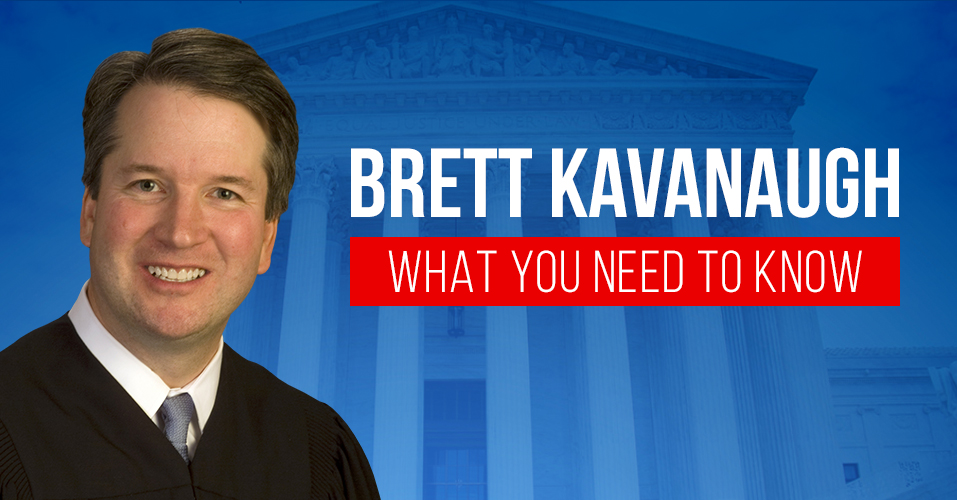 President Donald Trump named Judge Brett Kavanaugh to serve as the next associate justice on the Supreme Court on Monday evening to replace Justice Anthony Kennedy, who is retiring at the end of July after serving for 30 years on the bench. Judge Kavanaugh is President Trump’s second nominee to the Supreme Court, and he’s a good choice because of his experience and approach to the law, but he's not a home run nominee.

Many Senate Democrats and leftist activists have unsurprisingly come out against Judge Kavanaugh’s nomination. One group was in such a hurry to put out its press release opposing the nomination that its communications team forgot to replace the “XX” placeholder with Judge Kavanaugh’s name. Outside the Supreme Court, protesters were seen writing in his name on pre-made signs.

There are other levels of absurdity. For example, former Gov. Terry McAuliffe (D-Va.) tweeted, “The nomination of Judge Brett Kavanaugh will threaten the lives of millions of Americans for decades to come and will morph our Supreme Court into a political arm of the right-wing Republican Party.”

The rhetoric is ridiculous, and it’s easy to mock, but this is to be expected from a party whose House leader predicted “Armageddon” as a result of the passage of the Tax Cuts and Jobs Act and whose official Senate Twitter account claimed Americans would “get the internet one word at a time” because of the repeal of the so-called “Net Neutrality” rule. Keep in mind that the rule had only been in effect for roughly two years when it was repealed.

Putting aside the absurdity that will come from Democrats and the radical left, here’s what you need to know about Judge Brett Kavanaugh.

The accusation made by Senate Democrats was that Kavanaugh was too partisan because of his work for then-candidate George W. Bush on the recount in Florida during the 2000 presidential election and his pro bono representation of Elian Gonzalez. He also worked for as an associate counsel for Kenneth Starr and the Office of Independent Counsel during the investigation of President Bill Clinton. He was confirmed to the D.C. Circuit in May 2006 by a vote of 57 to 36.

Apart from the Supreme Court, the D.C. Circuit is the most important and influential appellate court because it has jurisdiction over administrative law and the regulatory state. Essentially, these are cases that deal with regulations promulgated by executive agencies like the Environmental Protection Agency (EPA) and the Federal Communications Commission (FCC). Needless to say, Judge Kavanaugh’s dozen years on the D.C. Circuit has prepared him for the many cases that will come his way on the Supreme Court.

During his time on the D.C. Circuit, Judge Kavanaugh has issued some 300 opinions. Writing at SCOTUSblog, Edith Roberts explained, “Perhaps because of his years of executive-branch experience, Kavanaugh generally brings a pragmatic approach to judging, although his judicial philosophy is conservative, and he has applied principles of textualism and originalism espoused by the late Justice Antonin Scalia.”

Judge Kavanaugh’s dissents have paved the way for appeals at the Supreme Court. The Court has agreed with his positions about a dozen times. He has criticized the Chevron deference, a particularly troubling precedent established by the Court in Chevron U.S.A. v. Natural Resources Defense Council, Inc. (1984). The decision allows bureaucrats to interpret “silent or ambiguous” statutes to create law without the consent of Congress.

“To begin with, it has no basis in the Administrative Procedure Act. So Chevron itself is an atextual invention by courts. In many ways, Chevron is nothing more than a judicially orchestrated shift of power from Congress to the Executive Branch,” Judge Kavanaugh wrote Harvard Law Review in June 2016. “Moreover, the question of when to apply Chevron has become its own separate difficulty.”

Judge Kavanaugh’s dissent in White Stallion Energy Center, LLC v. EPA was the basis for the Supreme Court’s decision to strike down the EPA’s costly Utility Maximum Achievable Control Technology Standards (MACT) Rule in Michigan v. EPA because the agency didn’t consider the costs. The rule would have imposed emissions restrictions on coal-fired power plants under the Clean Air Act, the cost of which would have been $9.6 billion annually, according to the EPA’s estimate.

Although the Supreme Court didn’t review the case, Judge Kavanaugh wrote a dissent when the D.C. Circuit denied rehearing a challenge to the FCC’s regulation of the Internet under Title II of the Communications Act of 1934. His dissent paved the way for the repeal of the 2015 Open Internet Order, also known as the so-called “Net Neutrality” rule. He noted that the FCC had no authority to issue the rule, calling it “unlawful,” and that it violated the First Amendment. He also took aim at the Chevron deference.

One more impactful cases in which Judge Kavanaugh played a role was PHH Corp. v. CFPB. In October 2016, Judge Kavanaugh wrote the opinion of a three-judge panel finding that the structure of the Consumer Financial Protection Bureau was unconstitutional because too much power was in the hands of one individual, the director of the agency, as opposed to a commission like other federal agencies. Although the panel’s decision was reversed last year when the case was heard en banc, Judge Kavanaugh has shown a healthy skepticism for the kind of power wielded by the administrative state.

Unfortunately, Judge Kavanaugh's skepticism of the administrative state doesn't extend to issues related to the Fourth Amendment. In Klayman v. Obama (2015), he issued a concurrence in the denial of an en banc hearing, arguing that the National Security Agency's phone "metadata collection program is entirely consistent with the Fourth Amendment."

This is particularly troublesome because the Supreme Court recently issued a ruling in Carpenter v. United States in which a majority, including Justice Kennedy, determined that police must get a warrant to access records from a cell tower. Justice Neil Gorsuch's dissent was aimed at bad precedent established in United States v. Miller (1976) and Smith v. Maryland (1979). In these cases, the Court determined that an individual doesn't have a reasonable expectation of privacy when it comes to third-party records, such as phone records.

Should another Fourth Amendment case come to the Supreme Court, one would have to assume that a Justice Kavanaugh would be a vote for the government's position. Therefore, it appears that Judge Kavanaugh is a step backward. He's not Justice Gorsuch. He's not even Justice Kennedy. He's more like Chief Justice John Roberts.

Another criticism of Judge Kavanaugh is his dissent in a 2011 case, Sevensky v. Holder. In this case, Judge Kavanaugh wrote that the D.C. Circuit didn't have jurisdiction to hear a challenge to ObamaCare's individual mandate. "Kavanaugh’s dissent arose from his belief that the 1867 Anti-Injunction Act precluded the court from deciding the merits of the individual mandate," Chris Jacobs recently explained. "The Anti-Injunction Act prevents individuals from challenging the validity of taxes in court until after they have paid them, which if applied to Obamacare’s mandate (which took effect in 2014) meant that a court challenge would not ripen until individuals had paid the mandate penalty on their taxes—i.e., in spring 2015, or nearly four years after the D.C. Circuit ruling."

Although the president could have made another statement choice similar to Justice Gorsuch, Judge Kavanaugh is a still good choice to serve as the next associate justice of the Supreme Court largely because of his approach to regulatory issues. The Senate Judiciary Committee has jurisdiction over the nomination and will schedule confirmation hearings. In the meantime, Judge Kavanaugh will make the rounds on Capitol Hill to meet with senators prior to the hearings. Former Sen. Jon Kyl (R-Ariz.) has been tapped to guide Judge Kavanaugh through the confirmation process.