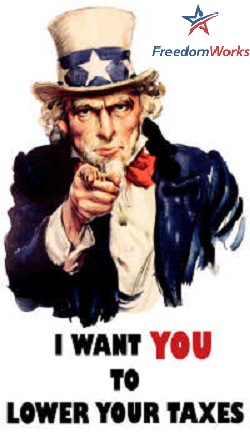 I Want YOU to Lower Your Taxes

In Ohio, the 1851 Center for Constitutional Law recently released a handbook outlining how citizens can reduce their own tax burden. Through a little known ballot process citizens can now slash taxes without any action from a legislator. No longer will constituents need to worry about electing the “right” candidate to lower their taxes, they can now take the power, and their hard earned money, back for themselves. Most exciting of all, Ohioans aren’t alone on this issue.

With many in the media focusing on national reforms, the substantial tax burdens from the state and local levels are often overlooked. Many counties across the country burden their citizens with astronomical tax rates that residents may not even realize are abnormal. State legislators and bureaucrats alike realize citizens are too busy to focus on minute, though powerful, changes to local statutes and take full advantage of it. State and local taxes have been on the rise for the past decade and show no signs of slowing.

When faced with the option to defund local governments often community members will show hesitation. Who can blame them? Americans are infatuated with the waste in Washington and often fail to realize that fraudulent spending can happen in their own backyard. Two of the most common misconceptions surround school levies and the efficacy of local officials.

Those who oppose raising taxes for school levies are incessantly referred to as people who “ want to deprive children of a better future ” even though these levies are generally thinly veiled cash grabs by ambitious bureaucrats. With over a century of data it has been roundly accepted that there is no correlation between money spent per pupil and the academic outcome, and yet concerned parents and community members are cautious to even vocalize an opinion against school levies.

There are a multitude of cases that ought to make even the most stringent supporters of school levies question the financial literacy of school districts. Schools from around the country have committed themselves to insane spending including 70 million dollar football arenas and a national trend of excessive administrative overhead . School districts, by and large, have more than proven to be poor stewards of the tax payers’ funds.

From small town America to metropolitan centers residents often take pride in their home towns, and by extension their local governments. Many find solace in the thought that their local leaders are distanced from the corruption and waste of Washington. How heartbreaking it would be to discover local governments are often home to the most egregious government expenditures.

From a small town in Illinois spending nearly $10,000 on commemorative bobbleheads to a rural community in Idaho being footed with a $5,000 bill for a local bureaucrat’s party local municipalities have no problem throwing around other people's money. Larger cities are also victim to horrifying expenses, Portland, Oregon, for example, is on track to spend an estimated $500 million eradicating a bug that doesn’t exist in Portland.

Unwarranted bureaucratic machines in small town America place enormous financial burden on communities with little to no return on investment. Some towns are so fed up with such expenditures they are opting to vote themselves out of existence to avoid the taxes.

Waiting on big government to restrain itself is an exercise in futility. Citizens concerned about government accountability and tax reform must take action themselves. If you are interested in staying up to date on tax reform efforts in your area you can get connected here.