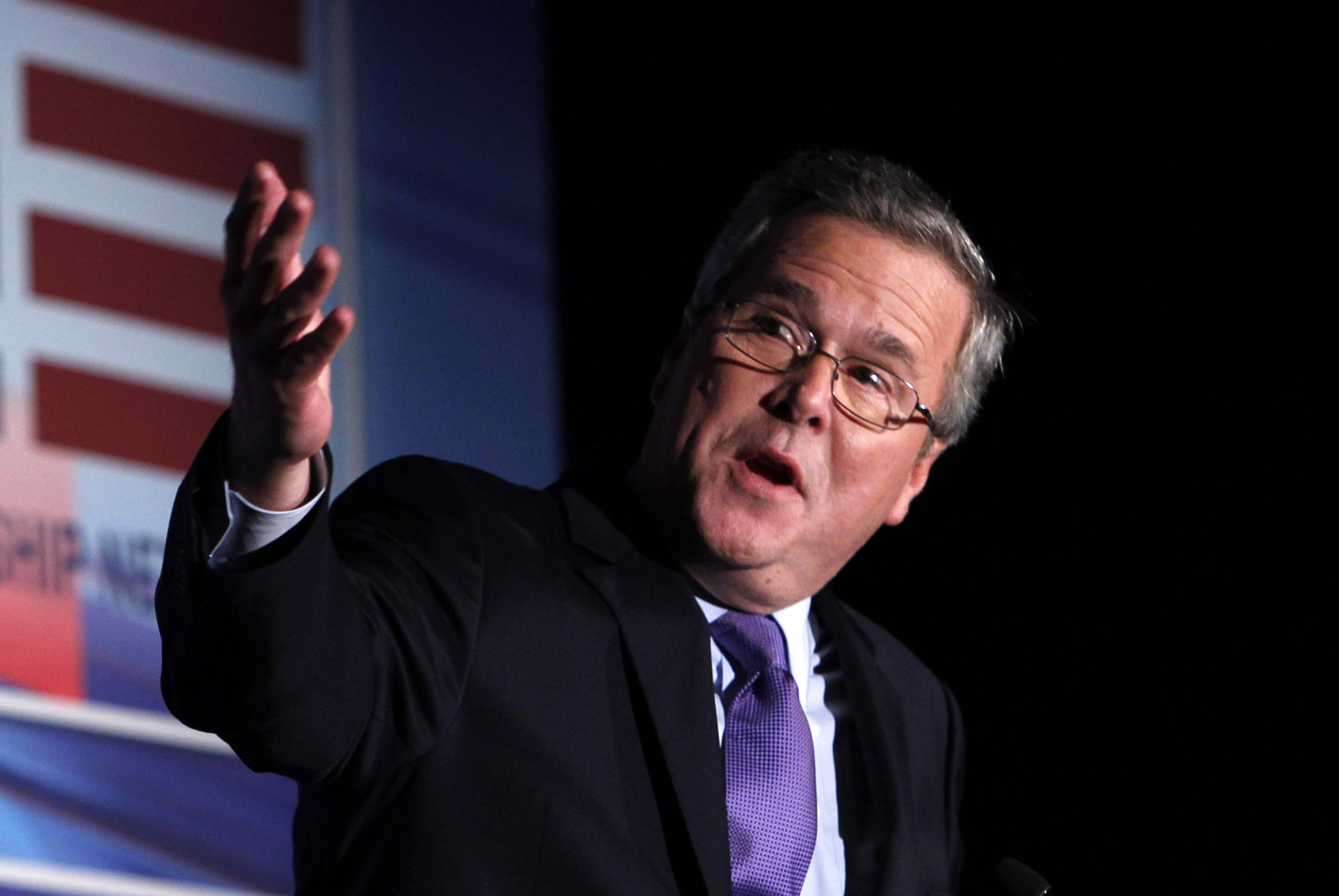 There's absolutely no evidence that the National Security Agency's domestic spying program has prevented a terrorist attack in the United States. This is a conclusion reached by the New America Foundation and the White House Review Group on Intelligence and Communications Technology. The Privacy and Civil Liberties Oversight Board could "not identif[y] a single instance involving a threat to the United States in which the program made a concrete difference in the outcome of a counterterrorism investigation."

Bush, however, hails the massive expansion of the NSA and its domestic spying program. "I would say the best part of the Obama administration has been his continuance of the protections of the homeland using the big metadata programs, the NSA being enhanced," the former Florida governor told Michael Medved on Tuesday. "Even though he never defends it, even though he never admits it, there has been a continuation of a very important service, which is the first obligation of our national government is to keep us safe."

Not only is the narrative that Bush is trying to set utterly false when compared to aforementioned reports by private and government-backed panels, there is no legal basis for the NSA's domestic spying program.

NSA apologists say that Section 215 of the USA PATRIOT Act authorizes this broad program through which the NSA can collect metadata on virtually every call made in the United States. But the Privacy and Civil Liberties Oversight Board rebutted this argument, noting "Section 215 does not provide an adequate legal basis to support the program."

The Privacy and Civil Liberties Oversight Board listed several reasons why this broad interpretation of Section 215 runs afoul of what the statute actually says. While Section 215 does authorize the collection of records connected to terrorism investigation, as the Board explained, it was not meant to apply so broadly that the government is collecting records of swaths of innocent people who are not suspected of terrorist activity. Rep. Jim Sensenbrenner (R-Wis.), who authored the PATRIOT Act and now advocates for reform to protect civil liberties, noted that this absurd notion rests on the idea that the government needs the "the haystack" (virtually every call made in the United States) "to find the needle" (records relevant to an actual investigation).

Moreover, Privacy and Civil Liberties Oversight Board noted that the language of the statute "permits only the FBI to obtain items for use in its investigations; it does not authorize the NSA to collect anything."

The Fourth Amendment exists to prevent the federal government from illegal searches and seizures through general warrants. No one disagrees that terrorism is a threat to the United States, but, as Rep. Justin Amash (R-Mich.) explained in an August 2013 interview, "it’s precisely because we live in this dangerous world that we need protections like the Fourth Amendment to the Constitution."

Section 215 will expire on June 1, and there's a showdown looming. Senate Majority Leader Mitch McConnell (R-Ky.) introduced legislation, S. 1035, on Tuesday to extend the provision through the end of 2020.

Reformers in Congress have, however, introduced the Surveillance State Repeal Act, H.R. 1466. This bill, which FreedomWorks supports, would bring to an end the NSA's unconstitutional domestic spying program and restore the civil liberties protected by the Fourth Amendment.

JEB is no genius - as much as I despise Arrogant Pinocchio Nose King Bo - NSA is not an Obama brain child - the Liberal Elite started the quest with Clinton - #2 Bush signed it into law - They consider it critical for control of the Citizens. Open borders are not a creation of King Bo (his insane amnesty for ILLEGAL ALIENS is). The BUSH FAMILY (2 Presidents so far) could have enforced Immigration Laws and closed the borders at any time during their 12 years as President. In fact Bush #1 promoted open trade across the Southern border - then Clinton laid ground work for open trade and Bush #2 signed the open trade across the Southern border into law That is not the 1% Liberal Elite plan. Wealthy Liberal RINOs and wealthy Liberal Democrats NEED CHEAP LABOR to continue their demise of the Middle Class - that goal is critical for an effective 2 class system - the haves and the have nots.. 26+ years in control and the election results give us no change - the winning Party makes no difference because both candidates are members or puppets of the 1%. The CANDIDATES will lie to us and give us a "warm and cozy" feeling but the trickle up flow of money continues. If we let them continue they will destroy what is left of America and scrap the US Constitution and Bill of Rights.

Surveillance Reform Is a Must for PATRIOT Act Reauthorization

Congress is preparing to reauthorize the PATRIOT Act within the next couple of weeks, a wide reaching law that was hastily crafted without much regard for the long-term implications. In the last few years, however, we've seen how certain sections of the law allow the government to spy on innocent citizens without warrants, violating their rights to due process guaranteed under the Constitution.

There's no indication that the National Security Agency's unconstitutional domestic spying efforts have thwarted an actual terrorist plot inside the United States. In January 2014, the New America Foundation released a report on the 225 individuals investigated for terrorism in which it explained that the so-called "all calls" surveillance program "had no discernible impact on preventing acts of terrorism."

Rep. Mark Pocan (D-Wis.) and Rep. Thomas Massie (R-Ky.) have introduced the Surveillance State Repeal Act that would end the NSA’s unconstitutional domestic spying. I can say without hesitation: this bill is the real deal.

Letter in Support of the Surveillance State Repeal Act