On King v. Burwell, the Administration Has No Plan 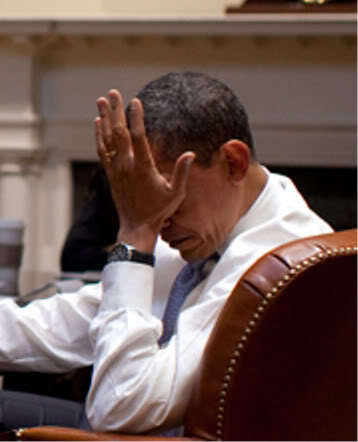 If the Court strikes down his subsidies, Obama has no idea what to do.

As the Supreme Court mulls over arguments in the King v. Burwell case that could unravel key portions of the president’s signature health care law, the Obama administration has adopted an attitude that is remarkably cavalier.

To recap, the issue at hand is whether the IRS can issue health insurance subsidies to states that did not set up their own insurance exchanges, a practice which a strict reading of the law would forbid. If the Court rules in favor of the plaintiffs, the administration will no longer be able to conceal the true cost of its expensive health insurance plans by issuing subsidies contrary to the law’s text and intent.

Seemingly unconcerned either with the president’s legacy, the fate of ObamaCare, or the effect of mandating health insurance on people who cannot afford it, members of the administration, along with the president himself, have have come across as cocky, almost bored, in recent interviews.

In February, Health and Human Services Secretary, the principal defendant in the lawsuit, wrote in a letter to Sen. Orrin Hatch, "We know of no administrative actions that could, and therefore we have no plans that would, undo the massive damage to our health care system that would be caused by an adverse decision."

IRS Commissioner John Koskinen, showing a similar indifference to questions about how his agency will respond if the Court rules to strike down the subsidies, said, “we don’t spend any time thinking about it.”

What’s going on here? Why does no one in the Obama administration seem to care about this decision? It could be a couple of things. First, the lack of a more energetic response may simply be due to arrogance. If the president is supremely confident, as his words seem to indicate, that the Court will rule in his favor, then there would be no reason to develop a backup plan. Given the history and temperament of this president, it would not be surprising for this to be the case.

The second possibility, however, is far more worrying. In an op-ed for the New York Times, University of Chicago professor William Baude suggested that the president could effectively ignore the Court’s decision if he doesn’t like it. By only granting exceptions to the four plaintiffs, Baude argues, the president could remain within the letter of the law, without extrapolating the decision to everyone else in the affected states.

If this is Obama’s intention, it would explain his apathy on the issue. Why worry about a decision you intend to ignore? Of course, such a move would completely undermine the authority of the judicial branch and further increase the power of the presidency to near limitless levels. It’s hard to imagine a more horrifying outcome, and we have to remain vigilant to ensure that, however the Court rules, the administration is forced to follow the law, even if they don’t like it.

Is your state at risk for an ObamaCare exchange?
Tags ObamaCare, King v. Burwell
Log in or register to post comments.
Related Posts
""
"https:\/\/www.freedomworks.org\/content\/facts-about-obamacare-supreme-court-cases?social=facebook_share"
""
https://fw-d7-freedomworks-org.s3.amazonaws.com/styles/thumbnail/s3/field/image/SCOTUS%20OCare_v2.png?itok=XpSn4GPm
Blog