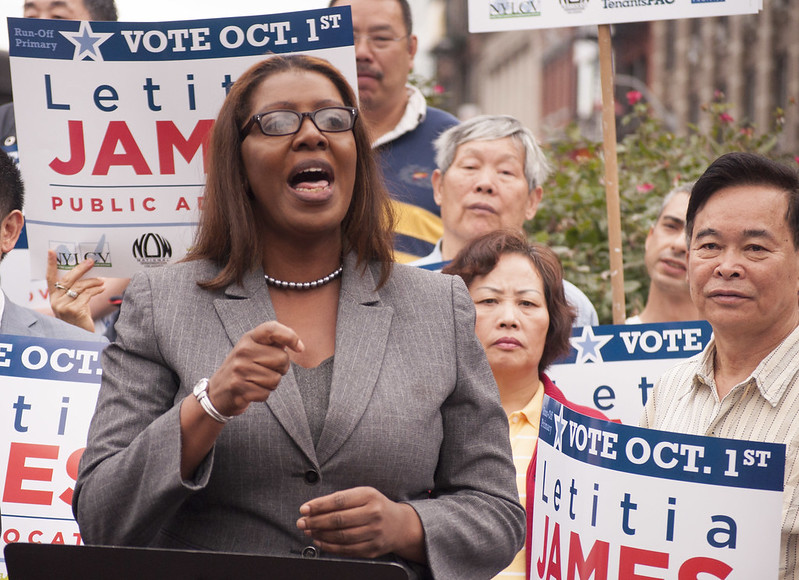 New York Attorney General Letitia James has continued to use the power of her office to persecute business.

Prosecutors – district attorneys and attorneys generals – have great discretions and powers to investigate, subpoena documents, indict and prosecute. Recognizing these powers, a group of climate activists – the Union of Concerned Scientists – met in La Jolla, California in 2012 and appear to have concluded to seek favorable Attorneys General and jurisdictions to bring lawsuits against fossil fuel companies in hopes of “maintaining pressure on the industry that could eventually lead to its support for legislative and regulatory responses to global warming.”

Highly likely, the Union of Concerned Scientists was made aware of the Martin Act of 1921 in New York, which is feared by every business entity. Nicholas Thompson writes a summary.

“The purpose of the Martin Act is to arm the New York attorney general to combat financial fraud. It empowers him to subpoena any document he wants from anyone doing business in the state; to keep an investigation totally secret or to make it totally public; and to choose between filing civil or criminal charges whenever he wants. People called in for questioning during Martin Act investigations do not have a right to counsel or a right against self-incrimination. Combined, the act's powers exceed those given any regulator in any other state."

Now for the scary part: To win a case, the AG doesn't have to prove that the defendant intended to defraud anyone, that a transaction took place, or that anyone actually was defrauded. Plus, when the prosecution is over, trial lawyers can gain access to the hordes of documents that the act has churned up and use them as the basis for civil suits. "It's the legal equivalent of a weapon of mass destruction," said a lawyer at a major New York firm who represents defendants in Martin Act cases (and who didn't want his name used because he feared retribution by Spitzer – former AG). ‘The damage that can be done under the statute is unlimited.’”

Hence, using the artifice of protecting the shareholders of Exxon, then New York Attorney General Eric Schneiderman subpoenaed Exxon Mobil’s documents related to climate research from 1977 forward. However, even with all the stars aligned the new AG Letitia James lost the lawsuit.

Walter Olson of the Cato Institute reviewed the trial judge’s outrage. “Judge Barry Ostrager also chided the state -- to quote the New York Post's account -- 'for being unprepared, for indulging in 'agonizing, repetitious questioning about documents that are not being disputed'; for pretending a witness was an expert when she wasn’t' and much more. … in a scathing opinion, Judge Ostrager ruled that the state had not shown Exxon investors to have been misled.”

Thus, Exxon Mobil has expended an enormous amount of time and money defending this case and many more cases being brought by other cities and states. What recourse is available to Exxon Mobil? If the judge rules that the case was frivolous most states have statutes calling for the costs of defense to be awarded to the defendant. For sure Exxon Mobil will be evaluating that option.

Even more important than the costs in the New York case is what transpired at the La Jolla meeting. Is there an ongoing cabal to silence or stop Exxon from doing research on the impact of the use of fossil fuels on the environment? Exxon has attempted to depose city and county officials that have initiated cases against Exxon; this was denied by a federal judge on grounds of being too speculative. However, recently a court in Texas has allowed for depositions to go forward. Most likely that order will be appealed. Involved in the appeal will be the issue of does a corporation have free speech rights, which most likely would ultimately be decided by the United States Supreme Court.

Basically, Exxon is claiming that their freedom of speech is being denied by threatening expensive lawsuits to force Exxon to stop research, and comments that challenge the orthodoxy of the radical environmentalist. James Osborne in the Houston Chronicle writes that the intent is to "… leverage to get oil companies to agree to a wide-arching climate change deal that would restrict what they can say about the issue - in violation of ‘of Exxon Mobil’s constitutional rights.’”

Alas, there does not appear to be a means to quickly resolve these legal disputes, which are very harmful to Exxon Mobil. More important to We the People is honest research and debate on fossil fuels and the climate that is essential and is not occurring.