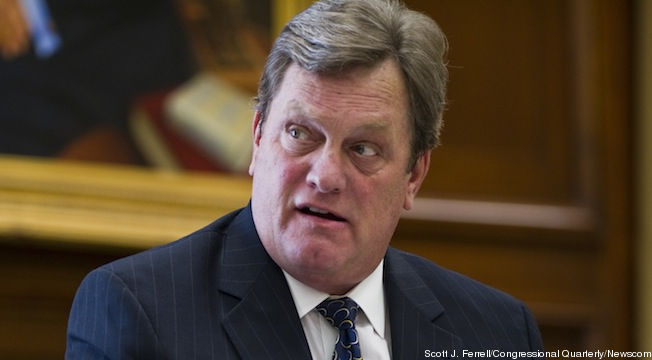 Congressman Mike Simpson, facing the reelection challenge of his career from fellow Republican Bryan Smith, has commenced running television ads touting his "conservative record". The advertisement, which was apparently not intended to be comical, is based on four key claims about Rep. Simpson’s record:

Each of these claims, while literally true, fails to account for Congressman Simpson’s overall fiscal record, which consists of a laundry list of votes to increase debt, spending, and even taxes.
Let’s take the claims in reverse order.

Simpson voted to repeal the Wall Street Bailout (TARP). Even his own campaign can’t deny that Simpson voted for the anti-free-market TARP bailout in the first place – not just once, but twice. Moreover, the vote that is cited in the ad did not repeal TARP; it merely stopped further bailout funding from going forward, after over $400 billion in bailouts had already been injected into the banking system . This claim is, as FactCheck.org has noted, half-true at best.

Simpson voted 49 times to repeal and defund ObamaCare. Which he did, except the one time when it mattered. In September of 2013, after years of symbolic votes against ObamaCare, House Republicans, including Simpson, sent a government funding bill to the Senate that did not contain any funding for ObamaCare. However, the House immediately equivocated by passing other funding bills that delayed or repealed pieces of ObamaCare, and after a month-long partial government shutdown Simpson and Republican leadership gave in and passed a funding bill that did not affect ObamaCare at all. So Simpson voted against ObamaCare, except for the one time where he could have actually made a real-world impact on the law. Notably, before the Defund ObamaCare fight took place, Simpson refused to sign a letter that would have publicly declared his intent to vote against any government funding bill that contained funding for ObamaCare.

Let’s take the remaining two claims together: “Simpson voted to cut spending by trillions” and “Simpson voted for a Balanced Budget Amendment.” He did cast a vote for a huge spending cut at least one time - for the Budget Control act - which led to the automatic sequestration spending cuts. The sequestration would certainly cut over a trillion in spending over ten years, if Rep. Simpson and other Republicans will let them. Yet, just this year, Simpson voted for the Ryan/Murray budget which allowed the government to spend billions of the money that the Budget Control Act was supposed to cut, which has begun the process of undoing the very spending cut he seems to be so proud of.

And these votes don't even count Simpson's awful votes from past years, such as funding the two most massive health care entitlement expansions (S-CHIP and Medicare Part D), the Fiscal Cliff deal that raised most Americans' payroll taxes, allowing a $100 million bailout of the International Monetary Fund, and voting for one of the most earmark-laden, wasteful transportation spending bills in Congress' history.

Congressman Simpson has earned an impressively-low 62 percent lifetime score on FreedomWorks' Congressional Scorecard for a reason - he is anything but a fiscal conservative. In the face of his actual voting record, his claims to the contrary simply ring false.

He is also very arrogant and condescending regarding voters and Tea Party leaders. I heard an interview with him on the local radio and he was down-right hateful when Cruz and Tea party were mentioned.

Imagine that..lies and half truths from a politician!! The freedomworks poll giving him a 62% "lifetime" score...I feel was overly generous! Seriously, when these "politicians" get caught "red handed" in A blatant lie much less A SERIES of lies, why is it they don't seem to be held accountable for said lies!

How an 'Integrated Postal Network' Represents Cronyism at Its Worst

For the first time since 2006, Congress appears serious about reforming the United States Postal Service (USPS). With the Postal Service Reform Act of 2021 introduced in both the House and the Senate, it seems as though something may be done. The U.S. Government Accountability Office has been urging since 2009 to truly transform this fiscally imperiled government agency.

Inflation a Worry but Can Be Hedged Against

A penny saved is a penny earned. — Benjamin Franklin

How Young People View Race, Partisanship, and The Future of Political Engagement

Republicans Must Stop the Left's Newest Assault on Election Integrity

A few weeks ago, Democrats in Washington were on the verge of passing a sweeping piece of legislation that would have put them in the driver's seat to determine the outcome of elections. This unprecedented power grab, laughably titled the “For the People Act,” was thankfully defeated.

The Power Struggle in Meat Production and Distribution | Save The Nation