Granted, the Front Range brain trust has set a low bar for itself, what with the shivering co-eds they paid to walk around Denver in their skivvies. And who could forget last month’s Brosurance ad featuring the dumbest, whitest seventh-year undergrads in the state keg-standing their nation to insolvency?

One would think that the Colorado Consumer Health Initiative would have watched a few Mad Men eps before trying their hands at another campaign. Au contraire.

Worried that the bro-only focus left out the ladies, the site DoYouGotInsurance.com (actual name) decided to make young women look dumb too. 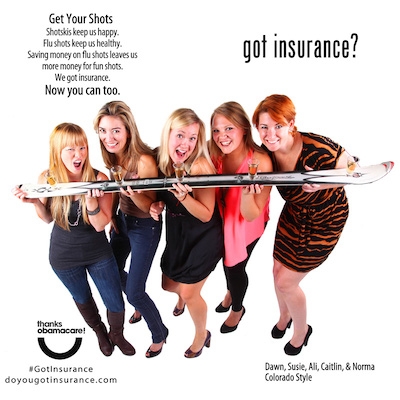 Another equally lame ad (this one featuring a white girl and a white girl) shows the duo drinking wine while clumsily exercising so they can stay “smokin’ hot.” I like a drink as well as the next guy, but I never considered ordering my neighbors to pick up the tab.

Please note that the only Latina in the new ad series is pregnant. Way to reinforce those stereotypes, guys. 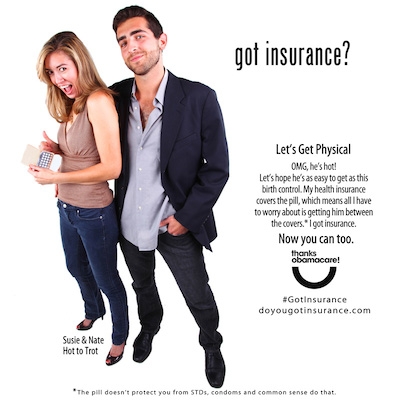 The ads get downright depressing with the introduction of white girl #8 and some dude so skeevy that he makes Robin Thicke look like Ned Flanders. “OMG, he’s hot!” the copy says. “Let’s hope he’s as easy to get as this birth control. My health insurance covers the pill, which means all I have to worry about is getting him between the covers.”

This ad made Obamacare look so bad that many liberals on Twitter apparently thought it was a parody attacking the program. Alas, it was all too real. Now that the health exchange has promoted binge drinking and the hook-up culture, what’s next — a date-rape themed ad? (I probably shouldn’t give them ideas.)

Effective ads aimed at millennials are aspirational: young people are shown to be smart, savvy and sophisticated. Smart marketers want twentysomethings to become customers, so they wouldn’t dream of insulting them.

The President and his hired guns have figured out that smart, independent, free-thinking millennials know Obamacare is a sham. Sophisticated young consumers realize they shouldn’t pay overpriced monthly insurance rates when they can just pay $95 if they get sick. And this net-savvy generation knows better than to put personal information on a broken website with endless security issues.

Not surprisingly, Colorado’s lousy ads don’t seem to be working. To date, only 3,700 poor souls have signed up, or 1 in 1400 Coloradans. Looks like the ad guys have a lot more people to insult.