MSM Ignored Oct. 30 Report Showing US Dropped Out of Top 10 in Prosperity Index

By: Jim Hoft and Rachel Pulaski

The 2012 Legatum Prosperity Index found that the "American Dream is in jeopardy" and "The national ethos of the U.S. is under threat." The assessment of prosperity is based on material wealth and personal well-being.  The Prosperity Index benchmarks countries in eight categories: Economy, Entrepreneurship & Opportunity, Education, Governance, Personal Freedom, Health, Safety & Security, and Social Capital. 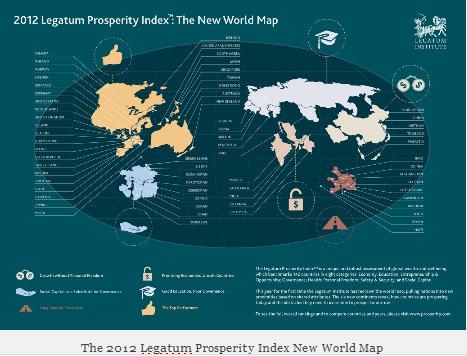 The Unites States dropped out of the global prosperity ‘top ten’ for the first time to the twelfth position in the worldwide prosperity rankings and fell eight places in ‘Entrepreneurship & Opportunity’. The assesment found fewer US citizens agree that  "hard work gets you ahead."

"The London-based public policy institute pegged the precipitous drop in the U.S. to a decline in consumer and voter confidence, along with a bleak economic and entrepreneurial outlook; four percent fewer citizens believe that "hard work gets you ahead," and business startup costs as a percentage of Gross National Income (GNI) have doubled in the past two years.
In fact, the U.S. economy sub-score dropped to twentieth and its personal freedom score dropped four points to fourteenth, just above Uruguay."

The report was first released on October 30, 2012, the group was hoping the report would have "electoral implications" but as always MSM remained silent:

"As the US struggles to reclaim the building blocks of the American Dream," Gedmin noted, "now is the time to consider who is best placed to lead the country back to prosperity and compete with the more agile countries that have pushed the U.S. out of the top ten."

Why is the Chamber Endorsing Democrats?

Most businesses offer a 100% satisfaction guarantee on their goods or services. We have heard about it all time, most of us even taken advantage of this offer from time to time. In light of this, it would be interesting to ask whether the U.S. Chamber of Commerce offers the same level of guarantee to their members that the rest of us get from them. Because if they do, it is about time their members start asking for their money back.

Top Ten Ways ObamaCare Sticks It to Young Adults    By Dean Clancy[Note: a .pdf version of this post can be found at the bottom of this page]

Top 10 Reasons Why Hollywood's Attack on RealDVD Is Wrong