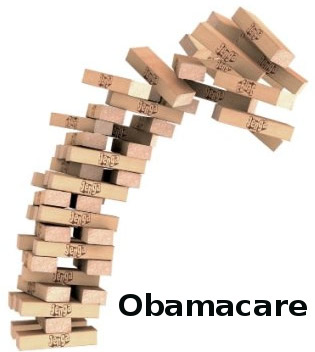 The ACA says insurance companies get subsidized based on people signing up "only in states that establish a health insurance ‘exchange’ that complies with federal law." When it turned out that states were not seeing the benefit to implementing their own exchanges, the IRS and Treasury Department decided that the text of the law didn't matter, that even signing up on the federal exchange was good enough. They interpreted the law as if the Tea Party and public backlash against the ACA were foreknown to the drafters, who in fact thought states would jump at the pot of federal money.

Now they've taken it a step further, and said people don't even have to sign up on an exchange for their insurers to get a subsidy check. It's completely criminal.

President Obama’s crimes are not victimless. Just as offering unauthorized subsidies through federal Exchanges will trigger illegal penalties against employers, offering unauthorized subsidies to people who purchase coverage outside their state-established Exchanges will likewise trigger illegal taxes against employers. Employers in Maryland, Oregon, and other affected states may want to lawyer up.

How many times have we heard that Obamacare would be fine, if only people knew how great it was? Periodically, the administration has had to change gears, or as David Harsanyi put it, do a reboot of its marketing plan:

I suppose you can highlight these things even if they’re untrue. Even if Affordable Care Act advocates decided to reboot their messaging, odds are it’s going to sound awfully familiar. Ever since the tumultuous passing of Obamacare, a law that’s supposed to be self-evidently moral and indispensable, disapproval ratings have consistently stunk and messaging has always been the culprit. Even during the passage fight, the focus was constantly shifting to deal with new concerns – from job creator to premium reducer to a law you could avoid altogether if you desired — this law was for you.

Obama adviser Ezekiel “Zeke” Emanuel, brother to the mayor of Chicago, says insurance companies will not be offering health insurance by 2025.

It isn't possible for government to behave as if it's running a business, because it's government, not a business. But on one thing, I do agree with Emanuel:

“I just don’t see health care for all,” he said, adding that it was “just not an American value.”

Meanwhile the Washington Post is happy to suggest that in the future, signing up for Obamacare could take as little as 10 minutes. That sounds ridiculous, but the only way it would be possible is if the government already had all of our health insurability and income data on file. Even then, we can expect to leave the 10-minute Obamacare signup and head over to pick up our free healthcare in our unicorn-powered flying cars.

Tell Congress to remind Obama that he doesn’t make the laws. That’s the job of our elected officials.