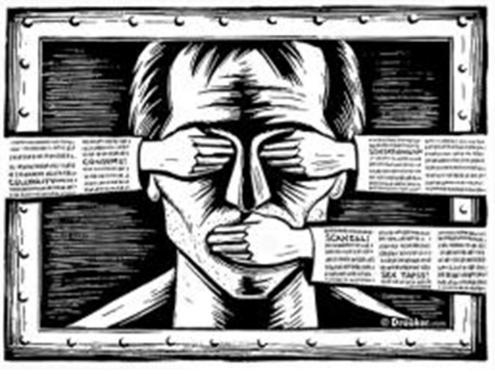 Hear no evil, see no evil, speak no evil.  The framers of our Constitution knew that power lay within those allowed to define (and restrict) such things as "evil".  Thus, the first stone cemented in the fortress of our Bill of Rights safeguarded against those who would abuse that power.  Freshly removed from the oppression of a ruling elite rationing liberty through a prejudiced and punishing fist, Americans were returned their God-given right to hear, see, and speak under their own free will.  The First Amendment gives us the freedom to speak and debate and determine for ourselves what defines evil.  We do not let evil define itself to us.

On September 11, 2012 violent Islamists stormed the U.S. Embassy in Cairo, removed our American flag, torched it, and replaced it with their own black flag of Islam.

The response from the Obama administration was to let the U.S. Embassy denounce, to the entire planet, our First Amendment right of Free Speech.

The Embassy of the United States in Cairo condemns the continuing efforts by misguided individuals to hurt the religious feelings of Muslims – as we condemn efforts to offend believers of all religions. Today, the 11th anniversary of the September 11, 2001 terrorist attacks on the United States, Americans are honoring our patriots and those who serve our nation as the fitting response to the enemies of democracy. Respect for religious beliefs is a cornerstone of American democracy. We firmly reject the actions by those who abuse the universal right of free speech to hurt the religious beliefs of others.

While hours of stretched silence loudly emanated from Obama’s White House, our international statement of American condemnation and apology to these violent assassins stood as the only voice of “outrage” coming from the United States.  An outrage from our leadership over murdered high level U.S. diplomats and two of our sacred Marines was turned, instead, upon America.  Eventually, the White House separated itself from its Embassy's horrific statement, but Obama showed once again that his campaign slogan should be, "Believe as I say, not as I do."  Because the words controverting the anti-American statements were followed by anti-Constitutional actions.

Fortunately, our Constitution protects us against a White House determined to allow American citizens only the right of "permissible" speech.  Since the current batch of self-deploring Americans in the Obama administration cannot simply remove "offensive" content from the Internet, they must request that it be removed.  After formally separating themselves from the American blame-placing by Obama's appointed members of the U.S. Embassy, they turned around and tried to remove from the Internet the very source of the blaming they just denied; the anti-Mohammad video.

Yesterday, the White House asked YouTube to review the video that supposedly sparked riots across the Muslim world and led to the storming of multiple US and European embassies and consulates. Blatantly ignoring the free speech implications of intervening with YouTube to shut down particular forms of disapproved speech, the White House said that they have “reached out to YouTube to call the video to their attention and ask them to review whether it violates their terms of use.” The video has been up at YouTube for months without incident, and without removal. Today, YouTube stated that the video “is clearly within our guidelines and so will stay on YouTube.”

The message from the anti-Catholic, anti-Israel Obama bureaucracy could not be clearer. America's Freedom of Speech should be filtered by the enlightened elite and should follow Obama's lead of bowing before Islam.  But, Google refused.  Foiled by the Constitution, maybe next time Obama should try to "strenuously object".  Or use the intimidating strong arm of the Federal government to investigate and harass the Christian filmmaker.

And what a surprise!  The Christian filmmaker behind the anti-Mohammad video is now being investigated by the Feds for possible violation of a probation based on a financial crime conviction.  His investigation was launched within days of the U.S. Embassy singularly blaming him for the breakout of violent Middle East chaos and the assassinations of our U.S. diplomats...which is an act of war.

According to the AP,

A Southern California filmmaker linked to an anti-Islamic movie inflaming protests across the Middle East was interviewed by federal probation officers at a Los Angeles sheriff's station but was not arrested or detained, authorities said early Saturday.

Federal officials have said they were investigating the activities of Nakoula, who has been convicted of financial crimes. If the probation department determines Nakoula violated terms of his release, a judge could send him back to prison.

The Constitution of the United States of America is our essence.  It is, also, the fortress that protects those within the right to life, liberty, and the pursuit of happiness and the stronghold that holds against the forces that would threaten it.  But, the strength of the Constitution comes from a simple and fragile source…the oath of loyalty given by those with the sacred charge of defending it.  America is the only sanctuary in existence that even attempts to preserve the free will God intended for each individual.  However evil is camouflaged, meeting it with moral confusion, weakness, and submission will give it the foothold it needs to destroy who we are.

When government attempts to intimidate through search and seizure techniques the government is a tyrant seeking to protect the deceit being orchestrated by government. The fact that they had to detain this individual rather than a simple background investigation indicates that the government is attempting to back the terrorists by intimidating the citizen. Every citizen has the right to voice their opinion without fear of the government intimidating anyone about it. The USA fought such radical thinking in WWII and other wars. We must continue to defend this right today.

Obama and his Czars have repeatedly used anything they can to suppress our rights. Executive orders and legistlation, and regulations that take many of the rights we think we have which now can already be suspended by declaring a state of emergency. So Kyle Davis, welcome to freedom connector. I see you joined 1 hour ago. We stand for freedom here. If freedom or GOD given rights are violated we react. Obama is probably a foreign born Moslem and should not even legally hold office. However our inept and weak govt does nothing to kick him out so we will try in November. Fear Mongering? Look at the usurper's record, he is a tyrant and dictator waiting in the wings, and mark my works he will try and steal this election if he cant cheat his way into winning and continue his onslaught of our rights. I watched the film. Regardless of the source or the quality of the acting, it is not hate speech and it is actually an accurate depiction of Muhammed and his sick twisted life. It is all in the Koran, liar, cheat, thief, fornicator, murderer, polygamist and pedophile. Such a nice and decent heroic role model, thanks Satan. Come on America Obama is NOT on your side. Go see 20016 and wake up!

Come now, this is a tad bit over the fear mongering level don't you think?

First and foremost, YouTube does bar what it considers hate speech, and the administration (as you pointed out) simply asked them to investigate.

Secondly, YES he was investigated. Unless I am mistaken, a condition of his parole was that he could not use the internet without permission. But let's not stop there...

He created/produced and posted something on the internet, which was supported by an anti-Islamic group, he is a foreign born national (Egyptian, no less), and he claimed to be an Israeli - his film (right or wrong) resulted in an attack on a US consulate that caused the deaths of several people. I would be upset if the government DIDN'T investigate him.

With revelations that the attacks were coordinated and protesters paid... it's not a far stretch for someone to consider that this might have also been part of the coordination (you don't know unless you investigate). No police arrested him, no handcuffs were put on him, and as they have reported, he willingly went on his own accord.